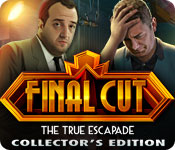 Your brother is directing a revival of a long abandoned project. A brilliant, one can say fabled, masterpiece that wrecked many careers, “The True Escapade”. With you assisting him and your fiancé playing the villain in the movie, its success is assured. But an accident on a scene makes your fiancé a prime suspect for murder and in the hands of a shadowy kidnaper with strange motives. Suddenly you are thrust in the spotlight in a murder mystery of your life.