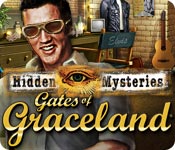 Hidden Mysteries®: Gates of Graceland® is a hidden object adventure game that revolves around the fictional premise that Elvis wrote a song shortly before he died as a tribute to his late mother.  The song wasn't recorded and is hidden someone in Graceland. You discover the first clue that the song exists and set out to locate it. Search the legendary Graceland to locate the remaining pieces of the song and assemble Elvis' lost musical treasure!

Re: Hidden Mysteries 11: Gates of Graceland

This game is SPECIAL, UNIQUE, “goes where no game has gone before...”

I’ve never seen another game like it. It incorporates REAL LIFE NEWSREEL FOOTAGE into the game’s VISUALS. These are REPLAYABLE video clips of Elvis and are BLENDED BEAUTIFULLY with the game’s own ART – and the STORY.

It also offers us an original SONG we must piece together, sung in a CREDIBLE Elvis-like voice, which can also be replayed as you get more of it. The WELL CRAFTED LOCATIONS are all crowded with MEMORIBILIA (much of which is recognisably based on actual material), the HOUSE is drawn from the REAL GRACELAND, and the VARIED SOUNDTRACK fits BRILLIANTLY with the mood and times of Elvis Presley.

I must admit, if you’re NOT a FAN of Elvis, the degree to which his image is splashed around in this game might be TOO MUCH.

The STORY is just such a REFRESHINGLY NEW IDEA. As a music historian, you come across evidence that Elvis wrote a FINAL SONG just before his death. You go to Graceland to track down the song. Upon your arrival, you receive a bump on the head, and when you recover consciousness you begin to have VISIONS of Elvis throughout his life. These are interspersed with your exploration of Elvis’ home.

This is primarily a simple HO ADVENTURE game. There are NOT MANY PUZZLES & they are mostly easy enough to do. Getting about gets a bit confusing at times, but there is a MAP that gives ACTIVE AREAS and a quick filling DIRECTIONAL HINT. The HO SCENES are strictly LIST with NO ANIMATION or INTERACTION. And there are a great many of them, as this is quite a LONG game.

Many areas do not offer much to do, which is one thing I think the developers could have done differently. My other complaint would be that a MAP inside a JOURNAL is a pain to access.

These developers took on quite a task for themselves when they decided to resurrect ‘THE KING’, but I think they did a GREAT JOB.