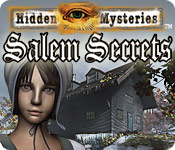 Help Constable Hawthorne investigate the rumors of witchcraft in Hidden Mysteries – Salem Secrets, a fun Hidden Object Puzzle Adventure game! Four young girls have been suffering from an outbreak of mysterious fits and bizarre tantrums. Rumors abound that the girls have been "afflicted" by local practitioners of Witchcraft, but nobody has yet been charged or tried. Investigate the scenes and uncover the Hidden Mysteries!

This is a strictly HO only game. NO PUZZLES, NO MINI-GAMES and NO HINT!

And I’m not exaggerating when I call it LONG & BROWN. To get from one end of the main street to the other, you pass 5 HO SCENES, despite almost every door being locked and no other people around. As you venture into the surrounding area, there are more... and more... and more. Each scene is visited twice, and their numbers are legion.

The GRAPHICS on this one are old style, – so lacking in detail everything looks plastic. Though the DEFINITION is VERY GOOD for a 2010 game. But there’s NO EXCUSE for the UNREMITTING BROWNNESS of the game.

ALL the HOS, ALL the town, all the surrounding area, all the interiors are BROWN BROWN BROWN. For added cheer, there is an occasional GREY. Even when an object is coloured, for instance, red and green maraca, they STILL don’t jump out at you, because the entire scene is drenched in mist. Boring and ugly.

GAMEPLAY consists of moving through the town doing HO SCENES, (strictly STATIC - NO ANIMATION and NO INTERACTIVITY), collecting info and items to help in your case.

There is an awful lot of back and forth. With almost NO INTERACTION with other characters, NO HINT, and a MAP that tells you nothing more than a REAL MAP would, it’s often impossible to figure out what to do next, without backtracking to the beginning and trying to find what you’ve missed.

There IS a JOURNAL, and a TASK LIST, which are your only sources of information as to what is going on.

The STORY is one that’s been done by others much better (see Midnight Mysteries – Salem Witch Trials). You are Constable Hawthorne, despatched to Salem to INVESTIGATE DEATHS & DISAPPEARANCES the locals are claiming are being done by WITCHES. It is up to you to separate FACT from SUPERSTITION.

It’s a CLASSIC TALE I happen to love, and I was very DISAPPOINTED to see it dragged down to this MONOTONY.

If you can ignore the ART in this one, and you’re a DIE HARD fan of HOs, this game may still be worth a look. It does make you think.

Personally, I found this HOG was a BOAR.