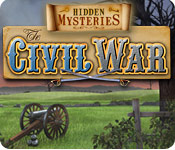 Join General Alexander, loyal follower of Abe Lincoln, for a Civil War reenactment. Search original battlefields for clues and letters left by members of a secret society. These individuals hid millions of dollars in gold, cash, and coin. Scour 18 hidden object levels while advancing through time from the Battle of Fort Sumter (1861) to Lees surrender at Appotomattox (1865). Cross rivers and grassy knolls to unearth Hidden Mysteries of the Civil War.

FIRST IMPRESSIONS
I decided to review this game because the later games in the series are such a mixed bunch, I thought I’d see where it all started. Well, it started in 2008 with this game, and it is remarkable how good it seems even now, almost 6 years later.

SIGHTS & SOUNDS
The graphics are of course, no good. No point expecting anything else. And the HOs are often so tiny, that this poor quality affects gameplay. But, for its day, this game did well. The sound tracks are wonderfully atmospheric, martial music of the period, cannon fire, shouts, bugles, all accompanying the more beautiful peaceful sounds of a nearby brook or bird song. The contrast is brilliantly done.

WHAT’S HAPPENING
This game provides large amounts of information, about the facts of the Civil War in the US in the 1860, and about the fictional story of a secret society amassing untold wealth. Each level brings with it letters, reports and biographies about real people, about the politics and issues of the times, and how it led to devastating war.

MAKING PROGRESS
This is a HO game. Within each chapter, there are a number of “battle scenes”, also known as HOP scenes *grin*, where you are given a list of items to find. The objects are tiny, and the scenes are distance views, no close ups unfortunately. There is usually a letter to be found in the scene, as well as a puzzle to do, one per level.

These puzzles cannot be skipped, but they are easy. As you progress, the number of scenes in each level increases.

This is to increase the degree of difficulty if you are playing timed mode. But you can opt for untimed and relax. Hints are limited, and I never did find out if there was a way to increase them, but it was awfully difficult not to use them up, even at the earlier levels.

LAST WORDS
I admit that this game will get on your nerves if you are not into the history and/or the story, and also if you do not like repetition, because you will visit all HOP scenes more than once. But for a straight HO game, I found it imaginative and interesting.
Nevertheless, it isn’t a game I could recommend, except to collectors, fans of classic games or history buffs.