Ghost in the Sheet

Ghost in the Sheet

Ghost in the Sheet
by Cardboard Box Entertainment - November, 2007 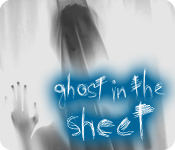 Welcome to the afterlife! It's nothing like you've expected. Ghost in the Sheet is a comedy adventure game of supernatural proportions. Become a ghost and master your new paranormal skill set to unravel the secrets of your life-after-death adventure! Mystery, intrigue, comedy and adventure await; aren't you just dying to play?

Ghost in the Sheet (Adventure)

WARNING:  There is a point where we have to kill some rats, but I think this puzzle can be skipped by hitting the Backspace key.

I got this way back when it was still available on Big Fish, even though I was afraid I would never play it.  Well, it's been years, and I'm finally playing it!

Options include separate sliders for Music, Ambiance, and Voice.  It automatically adjusted for my widescreen, and seems like it was made to be viewed that way.

It's the humor that drew me in on this game.  It's a horror adventure, to be sure, but with a comedic twist.  The first five minutes of this video show you the intro and the non-optional tutorial, which teaches you the basics of "living" as a ghost

Although we are playing the ghost, we play from first-person perspective.  In other words, we have instant transfers to new locations when we click on an exit -- we don't have to wait for our character to walk across the screen

The game can be played entirely with the mouse, but there are some keyboard shortcuts, if you wish to use them.  We have powers that we gain during gameplay, the first of which is telekinesis; moving things with our minds... after all, we have no hands!  We can either click on the icon of the power we want to use in the top left corner of the screen, OR we can use the F-keys to instantly choose the one we want.  For instance, hit F-1 for telekinesis.  Each power we gain will become a new F-key shortcut, in the order in which we gain said powers. F-2, F-3, F-4, etc.

The Tab key will show you possible exits.  This is very important!  The navigation is pretty whacked out, and it's hard to figure out what makes you go where.  I wish I'd known about the Tab key earlier on in my gameplay!

Once you get used to the layout, it's OK, but in the meantime...

The voice overs are great.  The deadpan humor of our character is beautifully portrayed by the actor, and our boss's voice kind of sounds like an angry André the Giant .  Very nice

Everything is subtitled, and if you finish reading before the characters are done speaking, just click the left mouse button to speed things up.

Like most adventure games, Ghost in the Sheet is about the story, but it's not totally linear -- we have a lot of freedom, and can ofttimes (once we get in to it) do things in the order WE choose.  The story progresses, like in the video intro posted above, via black & white cutscenes.  We also have plenty to read; both via things we find and through dialogue.  It's very important that you read everything.  Don't just assume that you've figured something out, for the answer may not be what you think it is!

As we are a ghost

... in a sheet... we can't carry anything around with us, therefore, NO inventory!  If you see something you think will be important later on, be sure to write it down!  Anything that we can manipulate will be used on THAT scene, since there are no pockets in our sheet!

We have plenty of SAVE slots, and I suggest using them often!  While you can't die (you're already dead, remember?

) I'm sure you won't want to repeat your gameplay if there's a power surge, or some such.  There's one sequence where something happens that MIGHT end your game, but I got through it without making a mistake, so I can't be sure.

The gameplay itself is not that hard, but some of the puzzles are so complex that there's no way I could have figured them out on my own.  Couple that with the fact that I had completely forgotten about (and sometimes completely missed!) some of the locations, and I think you can see why I needed help from the walkthrough!  If I had not had it available, I would have given up on the game in sheer frustration, but I was able to get the nudges I needed without ruining the gameplay or story

I ended up having a lot of fun with this over the past two days, and I'm glad I finally dusted it off to play it!

Recommended... as long as you don't mind a bit of frustration!

I felt like kicking myself for not getting it when it was on Big Fish.

I see hard copies available on Amazon - only one is being sold inexpensively though. I'd love to know if it can still be downloaded but haven't found where.
genkicoll

The Adventure Shop's is digital, but they're charging nearly $20 for the game