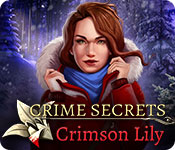 When a grim murder interrupts a private detective's vacation at the very gate to the hotel at which she was going to stay, she puts her plans for R&R on hold and sets out to do what she does best: solve violent crimes. All she has to go on is a single clue: a mysterious paper lily attached to the victim's frozen body. Could it be the killer's calling card? 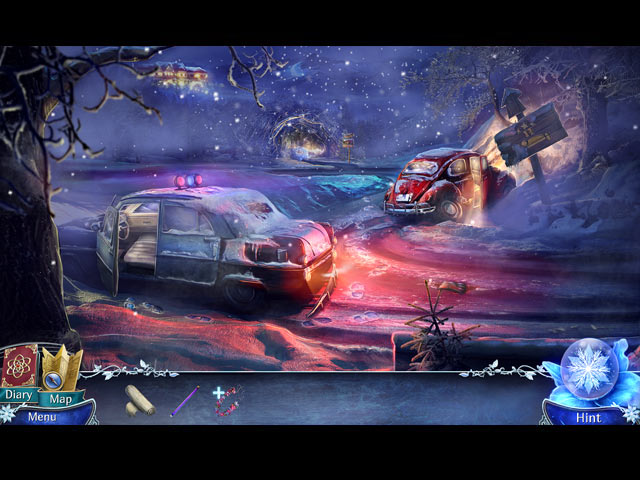 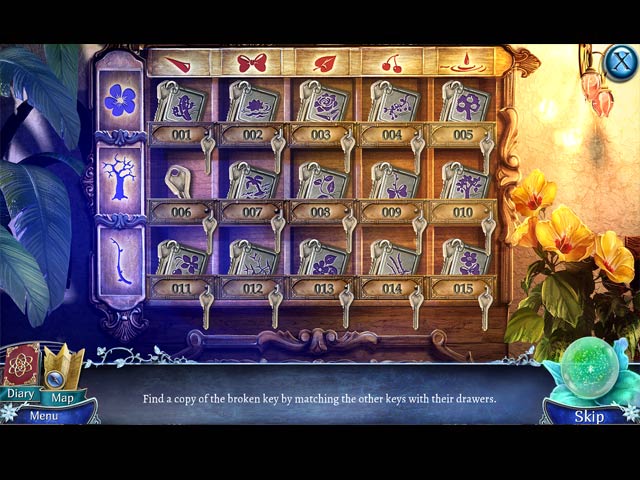 Access the options via the 'More' button on the main menu.  Options include separate sliders for Music, Sound and Voice overs, plus Custom Cursor, Full-screen and HD Mode.

There are four difficulties to choose from: Casual, Advanced, Expert and Custom, plus we have a jump-to MAP and a totally useless diary.

Let me say right off the bat to keep an eye out for snowflakes and origami.  They're easy to miss, and - as there is very little backtracking - if you progress too far, you won't be able to go back for them!

The gameplay is more adventure-lite than anything else.  There are hidden object scenes, but not a lot of them. Some scenes are recycled, but the second time you visit them, you'll be looking for items via picture - Fragmented Object-style - rather than having a written list.

There is minimal light interaction on most of the HOS... Things like lighting a candle or putting batteries in something before you can select them.  If you prefer not to do the scenes at all (or if you're stuck and don't want to use a hint), you can switch to a Mahjong mini-game instead.

There is a second kind of "hidden object scene" where you are searching for clues to figure out what happened in an area.  There are nine clues to find, each of which is listed below, only the writing is covered in snow... You won't be able to see what the listed clues are until you find them.  It's definitely different and it's also not as difficult as it sounds.  Simply hover your cursor over anything on the scene that looks odd or out-of-place, and if a "?" appears, click on that area to reveal the clue.  Once you find all nine, you'll have to do a mini game, which works like this:

Nine pictures, each representing a clue, will need to be put into chronological order.  It would be incredibly difficult to find the correct order, except that the sequence can be discerned by matching up the swirls that run through each picture.  Once you find the correct order, you'll see a recreation of what happened on the scene, all narrated by our lovely heroine detective.

The voice overs aren't amazing, but they're not as bad as some of the ones  I've heard in casual games, believe me!  The English is just fine during narrated portions, but there are a few localization errors in some of the later hidden object scenes (and during the "Search for Clues" sections, but I didn't pay attention to what those said, just what I was seeing on the screen.)  Here are the mis-listings I saw, and what they actually want you to find:

Puzzles in the game are pretty simplistic, and most of them require no brainpower whatsoever.

Most achievements are obtained via natural game progression, the exception being not using a hint during HOS, not skipping puzzles, and one each for finding all of the collectibles.  As I mentioned at the beginning of this review, the Snowflakes and Origami are VERY easy to miss, especially if you forget that you're supposed to be looking for them like I did...

For all of you achievement-hunters out there, there's a handy Steam Guide Walkthrough HERE that will give you all of the collectible locations ;)

Crime Secrets is not the best IHOG I've ever played, but I certainly do not feel that it deserves all of the negative reviews it's been getting.  I enjoyed this title far more than the last IHOG I reviewed, and will eventually go back to get those two missing achievements.  Despite the general consensus (on Steam), I enjoyed and recommend this game.
_________________
Never be a prisoner of your past.
It was just a lesson, not a life sentence.