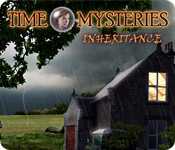 Vivien Ambrose has just discovered how to travel through time! After an evil time traveler kidnaps her father, it’s up to Vivien to follow them to the past. Using a mysterious crystal ball, visit the past, and meet Vivien’s ancestors. Collect seven magical rings to power up the crystal ball in this Hidden Object game. Set off through history in Time Mysteries: Inheritance!

I went to Settings first, and found a separate music and sound slider, plus an option for full-screen, custom cursor, expert mode and tutorial. You also have a regular mode and expert mode to choose from when you first start the game, so it looks like you can switch back and forth between the two during gameplay (good option to have!)

There are no voice-overs and cut scenes are skippable.

You start out with 4 HINTS and the gauge will refill in 5 seconds. If you run out of hints, you play a mini-game to get more. The mini-game is basically a match-3 game, and it's not hard. Even so, you can get hints on moves to make in the mini-game. You can earn up to 4 hints at a time.

5 mis-clicks will get you a slight penalty, but it is very short and doesn't really interrupt gameplay.

Items to find during the hidden object scenes are found via list. The artwork actually has a different "feeling" during gameplay than I thought it would (based on the screenshots on the download page). I actually like it better than I thought I would. Objects are nicely placed (ie. no items in bizarre places) and since you are hopping about in time, they paid some attention to making sure items are era-appropriate.

Overall, an interesting game with adventure gameplay that is interspersed with hidden object scenes and mini-games (besides the gain-a-hint mini-games). There is light interaction with the items that you find with to-ing and fro-ing in limited areas.
JustTheFacts

Having enjoyed Time Mysteries 2, and bought TM 3, I grabbed this on a DD, expecting to hate it, but wanting the full set.

I was in for a surprise. Sure, the graphics are 2010 graphics, but good enough not to interfere with game play, and the story was just plain fun. With the help of a talking crystal ball and family magic you had no idea you had, you set out for adventure into 10 (!) different centuries. Now I’ve no idea how historically accurate the game details were, but there were no telephones where there shouldn’t be. Same goes for the music. Each century had its own soundtrack, and they felt right to me.

Obviously, each adventure is short, but again with the fun. The emphasis was on HOs, which is fine by me, but there were some easy (also fine by me) puzzles and mini-games as well.