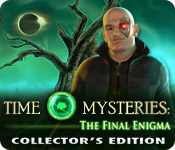 When Esther Ambrose receives a letter from her uncle prompting her to attend a meeting with a mysterious man, she can't possibly understand what it will lead to. Her journey will take her across time and space, as she tries to right old wrongs and influence the past to change the future. Esther will meet powerful allies, but also dangerous foes, whose only goal is to challenge her and make her fail. Help her rise to the challenge and save the world from catastrophe in Time Mysteries: The Final Enigma!

Re: Time Mysteries 3: The Final Enigma

Almost everything I said about “The Ancient Spectres” remains true for this episode of the Time Mysteries series. The bright glary light still illuminates clear and beautiful objects. You have sonar and can toggle a Match 3 game in HOs, and the game leans towards HOs rather than PA.

The action continues to centre round the PTD. Which remains addictive. And this game’s story is also as hard to follow and, though ending conclusively this time, ultimately as unsatisfying. Still, tripping across time and altering futures is irresistible fun, and it really is a beautiful game. And if I’m left feeling a bit ambivalent, I guess I was hoping for more out of this than it gave.

To those who’ve not played the other games, this one can stand alone, but just barely. It’s a lot more interesting if you’ve played the backstory.