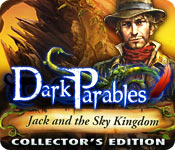 The legendary Sky Kingdom suddenly appears and a destructive barrage is unleashed upon an unsuspecting town. Play as the Fairytale Detective and embark on an investigation to rescue the townspeople. In this quest, you will meet Jack - an infamous treasure hunter who shares a secret past with the Kingdom - and discover the tragic history behind the chaos.

Re: Dark Parables 6: Jack and the Sky Kingdom

FIRST IMPRESSIONS
At the start, my reaction was, “I’m through buying Dark Parable games, forgiving the low definition graphics because of the art and the story”. I mean, there really is no excuse. These are quality games in every way, with astonishingly beautiful art, how can they continue to justify this poor quality in their visuals? Well, I surely don’t know.

But soon into the game, I was again hooked by the story. The developer has a knack for combining elements of several different fairy tales or fables into one delightful adventure. So now, I’m thinking of relenting. Again.

SIGHTS & SOUNDS
Well, you’ve heard my rant against the graphics, which, it is important to note, remain as bad in the HOPs as everywhere else. There isn’t even a wide screen option, so everything is stretched and distorted. The music, on the other hand, is lovely and in keeping with the mood of the game. The voiceovers are excellent.

WHAT’S HAPPENING?
As Fairy Tale Detective, you are once again called upon to investigate trouble in a fable-related context. The legendary Sky Kingdom has become visible, there have been bits of its island falling to earth, people are getting hurt. And there seems to be some kind of war going on. You hook up with Jack (move over Indiana Jones, this guy could be your stunt double), an adventurer who has actually been to the Sky Kingdom. In one of those touches I love about this series, Jack’s cottage contains reminders of all the previous Dark Parable games, and there’s a familiar face there.

GAMEPLAY
This is a FROG (fragmented hidden object game) that follows the formula of the earlier games. There are some great puzzles, and the adventure side of the game is very good – a little challenging, but not a struggle. But it is those FROG scenes that are famous. Beautifully crafted objets d’art are broken up and scattered throughout a scene, and you must put them back together. Again, better graphics would be so wonderful in these scenes.

There is a directional hint, and an interactive map, that does not allow you to jump. I don’t particularly like the map, which gives both objectives and areas of interest, because most of the time there are no areas of interest indicated on it. Yet obviously there is something somewhere that needs doing. So. I stick to hint. There is no journal.

There are 3 modes of difficulty, or you can choose to simply turn off sparkles on either HOPs or active areas.

CE BLING!
As with other Dark Parables games, the collectibles take the form of objects in the locations that make up a part of one of the fables used to construct the story. There are 4 per parable, and I think there are 5 parables. Other extras have not yet been indicated.

COMBINED IMPACT
It’s a good game. It could have been a great game. Still, for those who are playing on a laptop, this game will look magical!

I didn't do up a new review for this one. So no direct personal info on extras etc. My friend sfr8trfan lists the following information in his review at BFG.

8 HOPs and 3 puzzles in the bonus game.