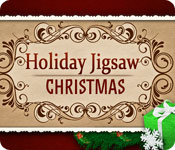 HO HO HO! Santa's coming and this year he's loaded his sleigh with 100 beautiful photos, unique game modes, saves, trophies and much, much more! Embark on an unforgettable adventure and enjoy more than six hours of game play. Solve your way through the holidays with Holiday Jigsaw Christmas!

The new series Holiday Jigsaw began with Halloween and is followed up by another using the same formula. And again, it seems a good game of its type.

There are 4 boxes with roughly 36 photos each, totalling over 100. There’s all sorts of stuff in them and no individual theme to the boxes that I could see.

The photos are not particularly good, some seem quite amateurish, but most seem in theme. Some don’t though, and it’s hard to see why they are here. I am concerned that I recognise at least one of these un-Christmas-like photos from previous jigsaw games. This developer publishes a lot of jigsaw games, but I hope they’re not stooping so low as to recycle the photos.

Other than that misgiving the game seems pretty standard for the better sort of these games, you can edit the puzzles by number of pieces (from about 12 up to about 300) or degree of irregularity of the cuts. Some of the games have pieces that must be rotated, others not.

You can choose to have the image pinned to one corner and magnified or not, or you can have a ‘ghost’ . You can also have them sorted or the edges separated. There is also a box for putting away some pieces manually, and you can have the pieces stick to the desktop. You also have a magnifier.

There is a choice of background colour.

The interface is clean and professional, and the music is serene. Would have been nice if it could have sounded more seasonal.

You can get scores based on speed and you can also get trophies for the usual achievements, numbers of pieces placed, times etc.

If you’re looking for a Christmas themed game to give you hours of entertainment, I think this one will suit you.