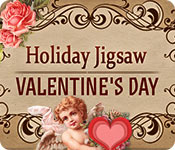 Somehow I missed this as being a soft release today!

I LOOKED for a soft release, and I didn't see one!  I KNOW it wasn't there when I looked this morning... it's a plot!  A plot I tell you!

I didn't see it either!! Dash darn, off to do a review!!
JustTheFacts

The developers have found a new formula for their jigsaws, and they’re sticking to it! The third in the Holiday Jigsaw series is almost identical to the others in the series. Except for 2 vital points. All new images of course, and now increased to over 500.
There are 4 boxes with roughly 128 photos each. There’s all sorts of stuff in them and no individual theme to the boxes that I could see. The photos are good, clearly professional (this is an improvement over the first game too), but nothing sensational. They are mostly in theme – plenty of hearts flowers and couples. There are also oodles of cats, and bucket loads of dogs. I don’t know, I just never saw my cats as the romantic types! *snicker*

The game seems pretty standard for the better sort of jigsaw game, you can edit the puzzles by number of pieces (from about 15 up to 345) or degree of irregularity of the cuts. Some of the games have pieces that must be rotated, others not. And you can toggle to your preference.

Within the puzzle itself, you can choose to have the image pinned to one corner and use a magnifier or not, or you can have a ‘ghost’ . You can also have the pieces sorted or the edges separated. There is also a box for putting away some pieces manually, and you can have the pieces stick to the desktop when they are correctly placed. You also have a magnifier. And there is a choice of background colour.

The interface is clean and professional. The music is pretty non-descript, neither romantic nor relaxing. They could have done better here.

You can get scores based on speed and you can get trophies for completing jigsaws of specific sizes. There are only 7 of them.

There’s nothing original about this game, there are dozens like it floating around, most of them made by the same developer! But then, provided there are good and new images, and all the little options, a jigsaw game doesn’t need to be different.