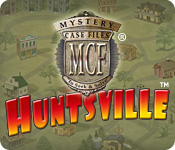 Do you have a keen eye for detail? See if you can locate  enough hidden clues to solve the crimes and become a Master Detective.  Mystery Case Files: Huntsville

provides players with a collection of  intriguing mysteries and brain-teasers to solve. There are picture  puzzles to ponder, strange crime scenes to explore, and much, much,  more! With thousands of hidden clues it's a new game each time you play  Huntsville! 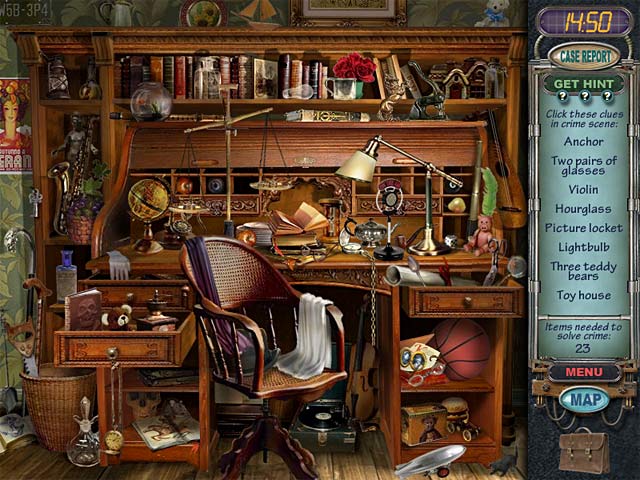 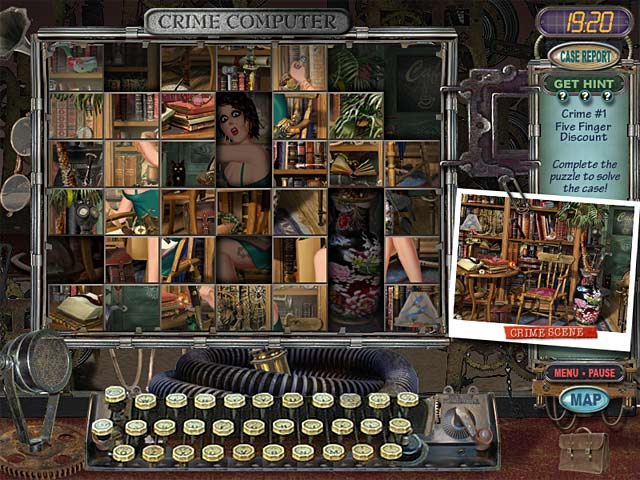 Mystery Case Files: Huntsville is a straight Hidden Object game, but is known for launching the most popular series of this type of game and fueling the genre’s rise to popularity. The I-Spy games were actually the first Hidden Object computer games out there, as far as I know.

I just finished this game tonight, so it’s rather fresh in my mind. A group of us at the Diving Bell Pub are playing the first four games of the series (in order; one per week) simultaneously and chatting about it- a little bit like a book club, except with games. Anyway, the quality of the graphics are actually fairly high, especially given how far we have come with regards to what we expect from these games. The scenes are junk piles of the highest order, but I can’t fault the game too much for that, since they were simply following the trail blazed by I-Spy. It does meet my criteria of being able to identify what I’m looking at, although some of the objects are pretty thoroughly obscured in some places. But, more often than not, I found myself using a hint and being exasperated with myself for not seeing it, because it was so obvious.

Okay, folks, I’m going to have to finish this tomorrow. I am extremely tired.

I’m back and ready to write again!

Huntsville has a fairly entertaining format. As with the other games in the Mystery Case Files series, the player is a detective, trying to solve a rash of crimes occurring all through the city of Huntsville. The map screen shows locations that are available to visit during a case. The first case has only two locations and 15 clues (hidden objects) to find, but by the final cases there are about seven locations and 50-some clues to find. Each case has a rather rigid time limit, during which the player must find the items required and then assemble a picture of the accused at the crime scene. The locations vary from
case to case, which makes up for having to visit the same scenes multiple times. The timer balances this out, additionally, because if I’d had to start a new scene from scratch every time, I never would have made it. It’s amazing to me that even scenes I felt very confident with could manage to throw things at me that I had not noticed previously. The picture of the criminal comes in after all the clues for a case have been found, and you should have heard me curse when I had two pieces left and time ran out! The pictures are a grid, but the squares can be swapped without restriction (It is not one of those “assemble by sliding the pieces via a single empty square” which, though I tend to be able to do them, they are not my favorite).

If time runs out, the player must then restart the case. The object list changes each time, but I seem to recall that the locations stay the same. The strategy that seems to work for me is to visit the locations I am the most familiar with at the start of each case, and find those last two items on the list before moving on to the next location. There are only three hints per case, so hints are extremely rationed. I visit new locations last so that I have some kind of a cushion with my time to find any tricky things. A lot of people advise leaving the last item or two on the list in the familiar locations if you don’t see them right away, but this does not work for me. If I don’t find them at the same time, I get worried and panicked that I won’t be able to find them in time. I would rather take the extra two minutes when I am calm than make a last second scramble to try and find the “unfindable” objects. It is just the way my brain works, and I am not saying either strategy is superior to the other. It will be an individual thing, in the end.

Too Long; Did Not Read: The cases are silly and punny and some of the pictures are pretty hilarious. If you can overlook the clip art heavy scenes, it is a fairly enjoyable game. It is not one that I expect to replay much, but it was nice to see the roots of the genre and how the Ravenhearst story came into being. It has a timer and only three hints per case (not per location), but the graphics are pretty impressive for when it was released. There is only one item I can think of that, when I used a hint to find it, I still did not see any resemblance between the clue and the image, and that was a ghost. There was one other clue that, when I used a hint on it, I frowned with displeasure because the item was clearly a pick axe and not what the clue said it was. But I remembered it every time thereafter. Also, I might never have played the game if it had not been for the group activity at the Pub.

Have you played Mystery Case Files: Huntsville? Did my review effect
your desire to play (or replay) the game? Did I miss anything essential?
_________________
Never be a prisoner of your past.
It was just a lesson, not a life sentence.

I love this Classic! It may be a straight HOG and some may find it very simple but I still enjoy it after all these years. Before Huntsville I played mostly adventure games that I purchased at places like Babbages for $50 or more. Those games were great and lasted a good bit longer than casual games but I still loved Huntsville and wanted more. My era of adventure games was truly ended. I became a BFG fan. Before BFG I played online games at Popcap and had fun while online. I was afraid to buy anything online because of horror stories about credit card theft, etc. So I just played online games. I also played FREE Shockwave games and online jigsaws at two or three sites.

Huntsville became an obsession. It seemed like forever before the second MCF was finally released. Until Huntsville the only HOG I played was a real-life one every Christmas. At Christmas my Mother always hid a gift in "Plain Sight" at least a week before the holiday. My Dad and I would go nuts looking for it. On Christmas Day Mother would reach up on a shelf or table, etc. and pull down the Jar of peppermints or whatever the gift was. It had, indeed, been in plain sight the whole time! So, you see, not only do I enjoy straight HOGs but I love the warm fuzzy memory of "Hidden" Christmas gifts!
JustTheFacts

Where It All Began

FIRST IMPRESSIONS
The first of the most talked about HOPA series on Big Fish, Huntsville was released in 2005. So do not think this is a game which would compare with anything available today. It was wonderful for its time. And is a must have for collectors, but really is too old now for anyone else. I think there’s one lesson to be learned for developers today, though. Laugh!! Perhaps one of the reasons the early Mystery Case Files were such a hit was that they were funny.

SIGHTS & SOUNDS
I guess there are worse games, visually speaking, out there even today, but this game is just too difficult to see. The graphics are both blurry and grainy, and many items are tiny or partially hidden. The HOP scenes are very cluttered. The music is decidedly repetitious, and I hate it, but it has become the ‘signature’ tune for the MCF series – at least, most of them.

WHAT’S HAPPENING?
You are the new detective, and you have 14 cases to solve, from theft to counterfeiting to malicious damage. Each case stands free of the others, and must be attempted in order.

GAMEPLAY
In order to investigate your cases, you must search for clues in various locations indicated on the map. You choose the order. There you will find a dozen or so objects listed in the panel on the right. You get 3 hints, and have a limited time to find all the items. At the end of each level, you have a “swap tiles” puzzle to complete the picture and see who the guilty party is. You then move on to the next case, after receiving your new detective ranking. The levels/cases get harder each time, with more hidden objects, more locations, and less time.

COMBINED IMPACT
I can’t like the game. It is just too old both in style and in quality of production. For those who remember the days when this was first released, I think it would be a great trip down memory lane, but otherwise...

I Don't Recommend This Game!
RenaissanceMom

Yup, I demo'd this (and their second, Prime Suspects) years ago and thought:

Definitely products of their time, and back then I wasn't touching casual games.

I wasn't either. I was offline 2003-11, nearly killed me. I'd never even heard of HO games when I first got back online.

I wonder if they were as radical in their day as the more recent ones have been? I have just finished refreshing my memory with Ravenhearst, and there are morphing objects (not collectible, just there), wonder if that was the first of them. I kinda suspect it was. And the damn puzzle boards!
genkicoll

Options include Full-screen* and separate sliders for sound effects and music.
*NOTE: The Steam version will NOT go full-screen unless you change your desktop resolution to 800x600.

You have 14 cases to solve, plus the "Big Boss".  There are twenty hidden object scenes, and you will explore at least two of them per case.

Each case is timed and you only have three HINTS for each one.  You can't earn more, nor they do not refill.  On the plus side, you do have a one-item leeway (if you have 15 items to find, you only have to find 14 to pass the level.)

There is a rapid mis-click penalty, which will cause you to lose precious seconds on your timer.

Being one of the early HOG's, I was surprised at the quality of the game.  The artwork is very nice and the game mechanics a familiar friend. The crime computer has been present from the very beginning of the series.

At the end of each case, you must do a tile-swapping puzzle.  Not slider-puzzles (thank goodness!), but the type where you can click any two pieces to have them swap places.  These pieces will lock in place when you have them in the right position.

I have only one gripe with the game, which is that you can't find items in rapid succession - You have to wait for each one to be recognized as having been "found" before you can click on the next item.

Definitely a good game to try if you like straight HOG's or are new to the genre, but if you are unwilling (or unable) to mess with your desktop settings, you might want to buy this one directly from Big Fish so that you can see the game full-screen.
_________________
Never be a prisoner of your past.
It was just a lesson, not a life sentence.