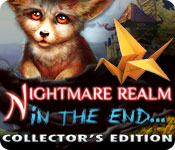 When your daughter, Emily, is suddenly seized by a mysterious force, you must journey to the Nightmare Realm to search for a cure. But nothing could have prepared you for what you find there… You soon find yourself trapped, racing against time to save your family. Can you track down the creature that cursed your daughter and uncover the secrets behind the Nightmare Realm before it’s too late?

FIRST IMPRESSIONS
This sequel to the popular first game of the series offers both the best characteristics of the original and a more sophisticated and immersive experience.

The introduction displays incredibly well done video of the people in the game, and offers just enough backstory to make having played the first Nightmare Realm unnecessary (although highly recommended).

SIGHTS & SOUNDS
The graphics, I think of as “painted in oil with a heavy hand”. There is a unique texture to them. Most of the game is pretty dark, and it is remarkable how clear and detailed the graphics are considering this. Some of the locations are lighter and beautiful. The visuals & sound both are at times quite creepy.

WHAT’S HAPPENING
In the first game, our young daughter is caught up in a nightmare world that comes alive through her art, and she is kidnapped by an evil force and dragged into a picture on her wall. We follow and save her, although our husband makes the ultimate sacrifice.

In this game, Emily is once more dragged into the Nightmare Realm, after dreaming that her father is there. The story is very involving, a complex narrative of Good vs. Evil, and a look at a world based on fear and exploitation.

MAKING PROGRESS
The gameplay is adventure with some puzzles and HOs. These are HO scenes with an interactive list, and some really excellent and original ways of making them very interesting. There are roughly the same amount of puzzles, also cleverly done. Hint actually gives you hints.

There is a map, designed as a board game. You have your token, which shows you where you are, signs that point out where actions are possible, event cards and unlockable character cards. It does not act as a transporter.

BLING!
Throughout the game you can collect some really awesome origami figures, which will unlock the character cards.

FAMOUS LAST WORDS
This game is a more intricate game than the original, and is the better for it. While not mind-blowing, it is indeed a really solid entertainer, with a story I found riveting.