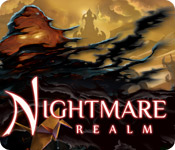 Journey into the mysterious Nightmare Realm and save Emily from an imaginary world that has been taken over by darkness! Explore gorgeous Hidden Object scenes and find helpful items to use as you battle a mysterious creature. Solve perplexing puzzles to unravel a mystery and help Emily escape before time runs out in Nightmare Realm!

I am terming this an Adventure-HOG, as it is the closet thing to an adventure-lite I've ever seen in a game that has hidden objects. The game actually went for such a long period of time with no HOG scenes that I thought it was an adventure-lite! The HOG scenes themselves are highly interactive, and I began to look forward to them, just to see what the game would make me do, next!

Options include separate sliders for Music, Sound, and Environment, as well as Custom Cursor, Aspect Ratio, and Full Screen.

There are two difficulty settings to choose from when you create your profile, and of course I chose the one with no sparklies! The hint and skip buttons take longer to recharge that way, but that's OK, I didn't want to use them, anyway!

The story can be very dark at times, and almost cheery at others. It crosses a wide spectrum of emotions as you progress, and the effect is both magical and intriguing. The only game I can liken it to is the Drawn series, which held its own kind of magic.

We have a journal that keeps track of many aspects of the story, and which was very helpful for me, as I might have forgotten when I should be going if I hadn't had it.

There are 33 origami figures to find throughout gameplay, which is mostly adventure. You will revisit the hidden object scenes, but once you find an item, it stays gone - always a nice touch!

Not only that, but you use items you find during gameplay in multiple places.

Every area of the game has different music, and this music is very appropriate, and at times, very pretty.

The task bar minimizes, giving you full view of the gorgeous artwork. Excellent for making your own screenshots! The task bar can be locked in place if you'd rather have it visible.

There is misclick penalty if you click rapidly enough

WARNING for those with animal cruelty issues:

Spoiler:
There are places where we need to use bugs for different reasons, and we have to catch, then slice & dice a fish.

These things were very necessary, and not cruelty, per se... I only mention them because I know how sensitive some people are to these things

There's something magical about this game, and the further I progressed, the more enamored I became. It didn't take long for me to realize that I had to have the CE of this one!

The Bonus Chapter itself is just as interesting as the main gameplay, though the hidden object scenes were not quite as interactive, and the puzzles on the easy side. Still, the story is great, and I'm glad to have gotten the CE!

Overall, this is a superb game, whether you get the SE or the SE. Highly recommended!