Love Chronicles 2: The Sword and the Rose
by Vendel Games 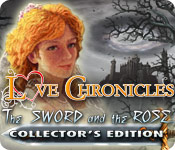 Lift an evil curse that has been cast on the kingdom by a  witch looking for revenge in Love Chronicles: The Sword and the Rose!  Scattering the petals of an island kingdom’s magical rose throughout the  land, the witch has plunged the kingdom into turmoil and it’s up to you  to save the day. Gather the petals, defeat a terrifying beast, and  confront the witch in this exciting Hidden Object Puzzle Adventure game!

Re: Love Chronicles 2: The Sword and the Rose

I’m kinda sorry I bought this one, although there’s nothing terribly wrong with it, and there are a lot worse games around, even on my own computer.

The introduction was a bit sappy, but I expected that from a game with Love Chronicles in its title. The game itself wasn’t a romance at all. It was your typical fairy tale storyline, admittedly. Handsome prince (that’s you) rescues beautiful princess from evil witch. But there the romance ends. And for most of the game, there is no real feeling of pursuing a goal. It took quite a bit of digging around before the first HO scene appeared and you could start feeling you’re achieving anything. After that the gameplay was well paced, and a decent length.

The visuals are passable but not up to par. And the HO scenes have much of their colour washed out, making for uninspiring searching. The music bugged me too, it didn’t add anything to the atmosphere and became repetitious. There was no voiceover, and no interaction with other characters, little animation, all of which made the game feel a bit flat.

There are plenty of mini-puzzles and HO scenes, none of them too taxing, and some variations of the ‘find 20 roses’ kind. For some reason (the previous Love Chronicles maybe?), the hero is required to make a lot of weird inventions to progress in the game. Really couldn’t see the point myself.

On the plus side, outside HO scenes, the hint was a direction to the right location, which I thought was a good in-between help, neither too much nor too little. There was also a scene where you panned around with cursor hover. I like cinematic touches.

As I say, nothing terribly wrong with this one, and others may enjoy it, but not inspirational, which is why I won’t be recommending it.