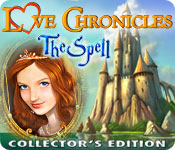 A young prince has been having the same dream and is summoned  far from his home. Help him remove an evil curse that has caused a whole  kingdom to be trapped in their dreams! Save a beautiful princess before  it’s too late in this fun and exciting Hidden Object Adventure game.  Dive into the world of Love Chronicles – The Spell, and defeat the evil  witch that has cursed the entire population once and for all!

Re: Love Chronicles 1: The Spell

The TRAVELLING/ADVENTURE component is basically removed, and a MAP-DRIVEN action takes its place. Each LOCATION is reached by map, and it is within that that the HO are found.

You are given a set of FRAGMENTED OBJECT SILHOUETTES and must find them within the SCENE. Later, some of these objects may only be found by returning to a previously cleared location. With the OBJECTS you acquire, you must complete TASKS, such as forging a dagger or creating a fishing rod.

Sometimes there are PUZZLES to complete, but they seemed FEW, and were not too difficult.

There is a HINT, only for HO scenes (because EVERYWHERE is a HOS), NO JOURNAL.

The GRAPHICS are GOOD, especially for a game this OLD. NOT meant for WIDESCREEN, it still manages to look clear enough to play.

There are also COLLECTIBLE maple leaves, and you are given the number of them to look for in each scene.
The STORY is that a young prince sets out on a quest to save an unknown kingdom from an evil witch, that he has been dreaming about. He finds the KINGDOM soon enough, but it seems to take forever for him to get any further. In the hour’s demo, I still had not made it through the castle gates.

The game looks LONG, but it plays very slow, and I found, in the end, that was what put me off this game.

It fits into my so-so category, but not high up enough for me to buy, even as a punchcard filler, and therefore I can’t recommend it.