Nightmares from the Deep: The Cursed Heart

Nightmares from the Deep: The Cursed Heart

Nightmares from the Deep: The Cursed Heart
by Artifex Mundi 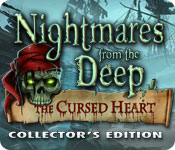 Would you like to enter the thrilling world where dangers lurk in every corner?

You are a museum owner who pursues an undead pirate who kidnapped her daughter. You quickly realize that the undead pirate is entangled in a tragic, centuries-old love story, and wants to resurrect his mistress with the youth’s life force. You feel sorry for the pirate, but you have to stop him before it is too late for your daughter…

You will leave your her modern museum quickly, and find your way to the wild and rundown pirate environments which are three centuries old. Due to the time that passed from the golden age of piracy, the locations are neglected and deserted, overgrown with plants. Full moon, bones covering the ground, and a skull-shaped rock add to the dark atmosphere of the locales!

What tragic events happened on the island before? What evil powers can make an old,  rotting ship sail? Is the scary, undead pirate, really as evil, as he seems? You will be able to learn these things  during your trip through the ghost ship haunting the seas of  the Caribbean, the grim Skull Island where pirates’ bones cover the ground, a ruined fortress ridden by cannonballs and catacombs stretching below the island. Are you strong enough to save your daughter? Will you dare to lift the curse?