Nightmares from the Deep: The Siren's Call
by Artifex Mundi - July, 2013 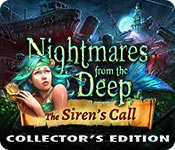 The rain slicked off his coat in rolling sheets as if compelled by the dark malevolence of the night itself. Lightning flashed at scattered intervals, and the thunderclaps carried on the wind were harsh and wanton. But there was no turning back. Oddly enough, he was hopeful. He had to deliver the artifact, no matter what the cost. Sarah Black could change the course of his fate, and the fates of so many others…

Nightmares from the Deep: The Siren`s Call is the sequel of the smash hit Nightmares from the Deep: The Cursed Heart. It is an epic adventure story with an exciting plot, outstanding puzzles, and unforeseeable depths of twists and turns. When Sarah Black, the curator of the Caribbean Naval Museum, receives a package from a mysterious messenger, she is unwittingly drawn into an ancient conflict. Moments after she opens the package to reveal an artifact, assailants descend on the museum and rob her of it. She can hardly believe that this is the beginning of a new nightmare from the deep! After blacking out in the museum, Sarah finds herself on the shores of Kingsmouth, a forgotten fishing town with an incredible secret. The would-be messenger reveals the sad truth: he and the rest of the town’s denizens are suffering from a curse that is gradually turning them into aquatic creatures. A curse that was cast by two powerful beings: the mayor, Murray, and the sea-devil: Davy Jones.

When I followed your link yesterday to try the game, I noticed a Bundle sale was going on.  3 of the games are Artifex Mundi, some of their good ones!

Crack the Case Gamer Bundle Sale on StackSocial.  Name your own price and get 2 games, but beat the average and get 6!  The average is only 1.50 right now, and not wanting to be too greedy, I paid 5.00 and got all 6 games!  I already have 2 of them, but still... One of them is the older Nightmares from the Deep, which I didn't have, so I can get caught up before getting this new one.  ETA I just downloaded it, and it's the CE!  I didn't expect that for 5.00!

djrum, August 26, 2013 in the D&E thread wrote:I'm currently playing the bonus in Nightmares From the Deep 2. I know a lot of you guys don't like pirate-themed games, but...man, these games are fantastic!
Nightmares 2 - We're on the high seas again, having been asked to help rescue a siren in distress. Having arrived on the island, we must outwit a corrupt mayor whose contract with the infamous Davy Jones has wreaked havoc on the unsuspecting townsfolk.
The cut-scenes are absolutely amazing, especially the slo-mo scenes.
The voice-overs are fitting. Once again, the story progresses with a small fee to the Guardian of the Chest (I love this character!).
The hidden object scenes are - lists, frogs, and replace items. The puzzles are good & not mind-breaking.
Achievements & morphing objects - yes.

I'm not crazy about pirate/water themed games in general, however, I do make an exception with the Nightmare series.
Simply marvelous work, Artifex Mundi!!!

I like the Artifex Mundi games too, Genki. Looking forward to the new Enigmatus. I hate to say it but I wasn't too thrilled with Serpent Creek or a newer one (Name escapes me) I betaed which was way too easy.
JustTheFacts

BASED ON CE GAME

FIRST IMPRESSIONS
The intro to this game is a blast. In very well done cut scenes, we sail across seemingly placid seas, then spy an island where all is clearly not right, watch helpless as an ancient sea monster churns the water around us, tossing our ship as if a toy and casting us... into our office in the museum! Well, at least we survived!

Our introduction to the backstory and the outlines of this one is very well handled. It is a combination of cut scenes and simple gameplay to get us up to speed before launching into the game proper. One thing I love in games is cameo appearances of other games by the developer, and this one has a lot.

SIGHTS & SOUNDS
The graphics in this one are great – apparently hand drawn, full brush strokes in oil. Colours are marvellous, but a lot of the scenes are dark. The animation, particularly of the characters, is brilliant. I really like the way the lead character’s ‘fish curse’ creeps up on him almost unnoticeably as we go along. The music, by comparison, is a disappointment, there is just nothing unique or interesting about it, and it gets repetitive very quickly. Voiceovers are very well done, and most of the time the lip sync is excellent.

WHAT’S HAPPENING
This game leads off from the end of the last one. We are a naval museum curator just returned from a battle with the sea-devil Davy Jones, making the most of the astonishing adventure. An unexpected encounter leads to a sore head, and our arrival on the unhappy shore of the island Kingsmouth. But the people of Kingsmouth are strangely alien, revealing blue veins and silver scales. Still, our mission is soon apparent: we must save the mermaid siren (and she’s not even a relative!), defeat the Mayor and lift Davy Jones’ curse.

MAKING PROGRESS
This game seems more adventure (though easy) than HO or Puzzle game. There are a lot of tasks to perform, story to keep track of, and obstacles to surmount. The many puzzles have a bent towards the pictorial (which I really like, we are, after all, fans of the most popular picture puzzles – HOs), with ones like an animated jigsaw, find the missing items and placing them on the picture board and so forth. This is in addition to the HO puzzles, which include interactive lists and ‘find and use’ silhouettes. These scenes are visited twice, and there is the option to play mah-jong as an alternative to the list HOs. Getting around is easy, with an interactive jump map and directional hint. The journal tracks the story and gives an objectives list.

FAMOUS LAST WORDS
I played the CE version of this game, and I am really happy that I bought that one, because it has many achievements and interesting collectibles. But it is not at all necessary for enjoying this game. The story holds together well, the game play is fun and varied, and the production values are top notch.