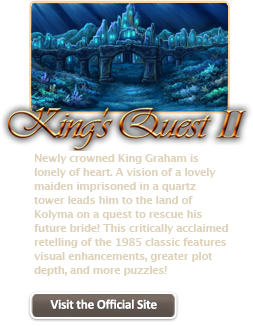 
King's Quest II: Romancing the Throne is the sequel to Quest
for the Crown, and was designed by Roberta Williams in 1985. The game
revisited Graham, now King of Daventry, and followed him on his journey
through the land of Kolyma. Graham’s ultimate mission this time was to
rescue the beautiful maiden, Valanice, from her quartz tower
imprisonment and marry his Queen. King's Quest II: Romancing the Throne
was made with Sierra On-Line’s AGI engine and featured the same 16-color
CGA graphics and text parser as its predecessor. Due to the commercial
failure of Sierra On-Line’s official SCI remake of King’s Quest I, no
plans were ever made to upgrade King's Quest II in the same fashion.

Despite this, many people regarded
this sequel as being the King’s Quest game most in need of an update.
Players were generally discontented, believing the puzzles did not vary
widely from the previous game and that the storyline was sparse.
Additionally, as with King’s Quest I, the graphics (which were
impressive for their time) soon grew painfully outdated.


Since its initial release in
December, 2002, AGDI’s King's Quest II remake has been downloaded over
451,400 times! The original speech add-on pack was downloaded more than
172,450 times, and the digital music add-on pack over 202,000 times,
again proving that there is still vast interest in the adventure gaming
genre!