King's Quest I (FREE from AGDI)

King's Quest I (FREE from AGDI)

King's Quest I: Quest for the Crown
FREE from Adventure Game Downloads Interactive 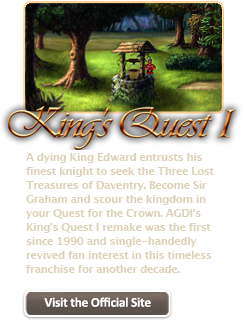 King's Quest I: Quest
for the Crown, a revolutionary game designed by Roberta Williams and
first released in 1984, epitomizes the classic adventure gaming
experience. This game was the first of its kind which allowed the player
to interact in an entirely original 2.5D world, and can be credited as
the game that started graphic adventure gaming on the PC. Though the
original AGI parser-based version is outdated and primitive-looking by
today's gaming standards, in 1984 it was revolutionary. King's Quest I
was not only groundbreaking, but also history in the making. It was
followed by seven sequels bearing the King's Quest title.

In 1990, Sierra released a remake
of King's Quest I, taking advantage of newer technology and graphics
(using their SCI engine, 16 color EGA graphics, sound card, and mouse
support). Unfortunately, this version ended up being a total market
failure. As a result, it was highly unlikely that Sierra ever had
thoughts of making an even further updated Point-and-Click version of
King's Quest I to match later games in the series. This is where we at
AGDI decided to step in. Our aim was to remake King's Quest I: Quest for
the Crown to the same level of quality as seen in Sierra's King's Quest
V. We believe that the enhanced gaming experience for fans has
justified our months of unpaid hard work.

Our understanding is that the big
companies stopped focusing on the adventure genre because, given the
huge budget required to produce adventure games, it didn't prove as
lucrative as other genres which were faster and cheaper to develop. Yet,
we're hoping that by bringing back such classics adventure titles, we
can prove that there is still huge fan interest in Point-and-Click
adventure games and a successful market out there. This is our
contribution to try to bring classic adventure games, as we used to know
them, back to public attention, providing an alternative gaming
experience for players who prefer to use their brains to solve puzzles
over quick reflexes.

During the first month of AGDI
releasing our King's Quest I remake in August, 2001, over 5,000 copies
were downloaded! In the first year, that number jumped to nearly half a
million. The first add-on voice pack was downloaded hundreds of times in
a period of just a few days, and thousands of times over the span of
several months! It's obvious that there are still numerous adventure
gaming fans, around the world, yearning to play more titles from this
fantastic genre. AGDI's King's Quest I remake, and all of our future
projects, are our gift to the fans of the adventure gaming community.