Deep Blue Sea 2: The Amulet of Light
by: The Game Equation 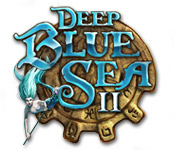 Dive in to Deep Blue Sea 2
and discover the secrets of Avalonia, an underwater world that needs
your help to be fully restored. Along your way, you'll meet a
collection of colorful characters and assemble a crew to help you in
your fast-paced and fun Match 3 quest. Collect powerful upgrades and
awesome powerups as you make your way through an engaging storyline in Deep Blue Sea 2: The Amulet of Light.

Deep Blue Sea 2 - Based on 30 minutes-worth of demo

Let me preface this review by saying that I never tried the first Deep
Blue Sea game, so I've nothing to compare it to save my general gaming
experiences.

First off, you have an option to play "Story" or "Relaxed". Normally I
would go for relaxed, but I wanted to see the story, so that's what I
chose. In this mode, your "timer" is the amount of air you have. Left
over air gives you a treasure bonus ($), which is used both towards your
high score and as currency on the islands

The music is appropriate for underwater scenes, but the sound effects
were comparatively loud. A quick trip to the Options menu took care of
that problem, and I also noticed that you can adjust the settings to
make the graphics less intense - very nice for those with slow
processors!

There is alternating game play here. You start off with a match-3
scene, then go on to a hidden object scene. The objects are hidden on a
scrolling scene (up and down), but the nice thing is that only the
match-3 scene is timed - not the hidden objects. There is no penalty
for random clicking, which is nice in this case

, plus you have refillable hints with no deductions for using them.

Your air timer is cumulative - If you start with 10 minutes on the first
dive (M-3) and use two of them, on your next dive you'll have 8
minutes. When you've collected enough treasure for the level or want to
end it early, just close the lid on the treasure-collecting tube. You
actually earn experience and new abilities by using your bonuses, which
is something I haven't seen in a Match-3 before.

I just barely got to the second hidden object scene by the time I
finished 30 minutes-worth of the demo. The artwork on these scenes
seems better to me than the match-3 portion. It was the same hidden
object scene as the first, but the items both move around, and new items
are added.

The rest of the game is a match-3 game. As you progress through the
game, you get new characters, who have new abilities (bonuses) you can
use. Besides collecting artifacts by bringing them to the bottom of the
grid, you collect "treasures", which are a variety of sea creatures
that smile at you when your cursor is close to them.

My overall feeling on this game is so-so. I can't quite put my finger
on it, but this game is missing that little something that would make it
addictive and a must-buy for me.