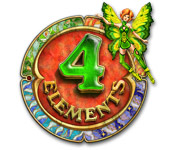 The ancient kingdom is in trouble! The magic of the four elements that kept it running for centuries has been corrupted by evil powers and the altars no longer yield the energy of life. It is up to you to unlock the 4 ancient books of magic and collect 16 mysterious cards that will help you restore the kingdom
to life. An adorable little fairy will be your aide in this perilous journey as you encounter elementals, dragons, knights, and various magic creatures. Using a mix of classic addictive game play ideas but taking them to a new level with innovative twists, explosive bonuses, spectacular visual effects, and fascinating storyline in amazing animation, this game by Playrix is a load of fun.

In anticipation of the soon to be released sequel, I decided to review 4 Elements today! Playrix Entertainment developed this very pretty game. Other titles you may recognize from this developer include the Fishdom games, Around the World in 80 Days, Gardenscapes, and Royal Envoy. The things that really stand out to me about these games is their unfailing level of quality and beautiful graphics.

4 Elements is a Match-3 game with some Fragmented Object scenes and find the difference mini-games. I spent the first couple of boards wondering what I had done to win each one, but I was having so much fun that it didn’t really matter to me. 4 Elements has a few things that make it really unique, in my opinion, in a genre of games that are often criticized for being too much alike. The graphics are beautiful and pleasing, and the animations are quite satisfying. My one complaint about it is that there is no way to skip through scenes that aren’t relevant to the game play, like the end of the boards where the score is
tallied, or the lead in to the find the difference pictures.

In any number of Match-3 games, the object of each level is to make a match over either specific tiles or each tile. 4 Elements is a variation on that theme. It falls more into making a path by destroying the background tiles- unlike most games of this style, the path does not need to be made sequentially. Once part of the background has been fully broken down, it will stay that way. That is because there is no little person to walk along the path. There is a liquid that needs to flow to the tree at the end of each board. The board is computer
controlled, but will not move forward until the liquid has reached a certain point. This means that the player can’t go back to an earlier point on the board at will.

The levels are timed, but the timer is VERY generous, and on the rare occasion that I ran out of time, I simply played the board again. There is no limit on how many times one can replay the levels, which is a feature I really appreciate. The music is nice and soothing, and there is even a story about restoring a magical land of wonder to its former glory. I am not a stickler for plot in Match-3′s, but this was pretty nice. I like pretty fantasy stories, so it suits me.

Prior to starting a new elemental area, there will be fragmented object scenes to play through. This, right here, was my gateway drug into playing hidden object games. I found that I liked looking for things that I actually needed to use in a scene, in order to progress. The scenes did not last long and were very easy to play, but they made me look for more games of that type. I must say that I also really enjoyed the find the difference games. They were all pictures from the legendary book of the Elements and pertained to the story’s progression-they had been marred over time, and I had to set them right. Some of the differences were quite tricky to locate, and I was glad the hint button was accessible. I can’t recall if the game had a skip button, but it seems likely.

The style of match-3 in this game is click and drag. The bigger chains will cause explosions, which can be used to break the pathway that may not be reached otherwise. There are also blocks frozen in ice, which can be melted by using them in a chain or by using a power up. The power ups are gained by making matches of that power up’s specified color. I won’t spoil the nature of the power ups, but they are all useful to game play, which is not always the case in this type of game.

One other flaw with the game is how scoring is tallied. The faster a level is completed, the lower the score. However, it is still scored on a “high scores” basis. This could be easily fixed by adding a point boost based on how quickly the board was completed, and it probably will not matter to you if you aren’t a stickler for scoring, but it is something to keep in mind.

Too Long; Did Not Read: 4 Elements is a great Match-3 title. It has quite a few features that set it apart from the rest of the genre. It has a timer, but the timer is pretty generous, in my opinion. The graphics are stellar and the story is pretty cute. The scoring is not very well designed. It is a fairly lengthy game and one that I do not regret paying full price for.

If you have played 4 Elements, what did you think of it? Is this review inaccurate in any way? If you have not tried it, did this review effect your desire to try it?
_________________
Never be a prisoner of your past.
It was just a lesson, not a life sentence.