Cursed Memories: The Secret of Agony Creek
by: Vast Studios 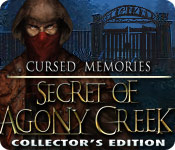 After waking up chained to the floor of a disgusting cabin, you must discover the Secret of Agony Creek and escape before it’s too late! Avoid a dangerous police officer, a mysterious phantom, and many more dangers in this incredible Hidden Object Puzzle Adventure game! Figure out why the town was evacuated and learn about the founder’s shady past in Cursed Memories: Secret of Agony Creek!

This was the daily deal last week, so I took a chance and grabbed it. I'm not sure what it was about the game that didn't click with me... it's a well-made game, but I wouldn't have bought it at full price. I think part of the problem is that I had technical difficulties with it on this computer: The bottom of the screen was cut off, so I could barely see the journal and hint buttons, and most of the items in the inventory were cut off, as well. I had no way of knowing when I'd collected all of a certain needed item (ie. five buttons), because the 5/5 part wasn't visible.

The one nice thing I saw in the game is that while they did the same-old same old catch-the-mouse task, it was for the mouse's welfare, rather than to distract a cat (or other animal).

Middle of the Road

The lousy thing about the latest and biggest monitor i could afford is that it shows up all the flaws in the graphics not seen on a smaller screen. I played this in windowed mode because the graphics were bad enough to interfere with my enjoyment playing full screen. Creep factor is good though.

This game is not bad, but would never make my A list. The story is fairly vague and the ending is, well, different than I expected; not overly convincing. It took me a long time to get into it, and the game isn't that long, so that was a negative.

On the positive, the puzzles were easy enough for me to complete most of them without skipping, and the HO scenes were interactive and unusually creative, with things like braille and binary code and plaid to look for. The logical flow was good, you never really get stuck wondering what to do next, and there is little toing and froing.

Overall an average sort of a game. I'd like to see something similar from the designers, with improved technicals.
Probably not a game to appeal to hard core HOPA players, though there is a harder level.

For newer players, I think it'd be quite good.