Enigmatis 1: The Ghosts of Maple Creek

Enigmatis 1: The Ghosts of Maple Creek

Enigmatis: The Ghosts of Maple Creek
by Artifex Mundi

Series links: Enigmatis 1: The Ghosts of Maple Creek, Enigmatis 2: The Mists of Ravenwood 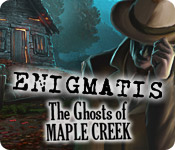 Find a kidnapped teenage girl and save yourself in Enigmatis: The Ghosts of Maple Creek, a fun Hidden Object Puzzle Adventure game!
After waking up in a tiny town in the middle of nowhere, you must piece  together your memories and figure out why you ended up in Maple Creek.  Discover the ancient evil that lurks in the seemingly peaceful landsof  Vermont and learn the truth in this thrilling detective story!

The first thing I noticed when I entered the game is that I'd played it before... But that didn't make sense, I KNEW I hadn't played it, yet!  Turns out that the opening scene is almost the same as the one for Echoes of Sorrow, so if you experience déjà vu when you enter the game, give it a minute -- it is definitely much different than Echoes!

There are separate sliders for music and sound, and the game is fully voiced over.  There are options for custom cursor, full screen, aspect ratio, and you can also switch back and forth between regular and expert mode on the options screen, as well.

There are two difficulty modes to choose from, Regular or Expert.  Besides the usual differences, Expert mode has a misclick penalty, "less direct hints" from the player character, and no sparklies (except those that indicate a hidden object scene)!

Using a HINT during the adventure portion of the game will give you a directional arrow if there's nothing for you to do where you are, and it will NOT discharge the hint.

We have a journal, but it only records the basics. From the journal you can access an objectives list, and the  MAP (which does NOT include a jump-to option.)  If you're playing on expert mode, active areas will not show up on the map.

The hidden object scenes are horribly cluttered.  Nothing tiny or overly dark, but VERY crowded.  The only good thing I can say about these scenes is that there are a few items that are craftily hidden, instead of depending on the sheer volume of items to obscure things you're trying to find.  There is light interaction on a few of the scenes, but only a few.  The HOS in this game really aggravated me, and nearly made me stop playing a couple of times >_< and even worse, we visit each scene two to three times.

On the plus side, there is quite a bit of time before we hit a HOS a second (or third) time.

As we collect clues, they are sorted via our Evidence Board.  We have an Evidence wall where we sort things and make deductions about our case.  It's best to sort as you go, lest you get overwhelmed!

This is a very good game, and LONG, with 44 locations, not including the scenes where we zoom-in or the HOS.  The story is interesting, the gameplay is good, and the graphics are well-done.  I especially appreciate the differences in expert mode, and the lack of hand-holding!

After all is said and done, we come to a solid conclusion with a "To be continued..." at the very end.  I would have wondered if the TBC was in the bonus chapter, but having read the synopsis for The Mists of Ravenwood, I can see that the story does, indeed, continue in the next game (which should be out some time soon~!)

Despite my irritation with the HOS, I really did enjoy this game, and definitely recommend it

I am so disappointed, I got the collector's edition of this game from Artifex Mundi for free just this last week, and decided to replay the game now with the bonus chapter, but it glitched out on me 3/4 of the way through the main game. Arghhh! And I can't even get the satisfaction of a coupon consolation, because I didn't pay a cent for it! (well, except I DID pay for the cost of downloading the damn thing!)

Yay! Dummy me found out the error I was making by myself - never heard from Artifex Mundi. So here is another...

EXCLUSIVE TO GGG, THE DOUBLE WHAMMY!


The opening moments of the game are HEARTSTOPPING as we watch a young woman RUNNING FOR HER LIFE through a forest towards the town of Maple Creek. At the commencement of the game you realise you are that woman, but you have no recollection of how you got there, or what or who you were running from. As you progress you remember you are a DETECTIVE trying to locate a MISSING GIRL, and as more evidence comes to light, you begin to reconstruct the case.

The most important discoveries are finding your NOTEBOOK & MAP. The map tells you where you have things AVAILABLE TO DO, but doesn’t JUMP you to a new place. This is a failing in the game because there are a LOT OF LOCATIONS, and a lot of toing and froing.

You also find your EVIDENCE BOARD. Using this becomes a mini-game of its own, as you must connect the pieces of evidence to the relevant aspect of the case, and draw conclusions.

There almost NO PUZZLES at all in this game, but there are a LARGE NUMBER of HO SCENES. These are slightly INTERACTIVE LISTS. They are very good HOS in which items are clearly seen and identifiable but very cleverly hidden. There is an ADVENTURE aspect to the game, and it is straightforward and RELATIVELY EASY. I rarely used the DIRECTIONAL HINT.

The GRAPHICS are VERY WELL DONE. They are drawn in varying shades of light, but are always artistic and detailed realism. Plenty of realistic AMBIENT sound as well. The VOICEOVERS are EXCELLENT.

This is solid, well constructed game which would appeal to most HO gamers, without quite getting to the standard that would send us over the moon.

A pleasure to play.

The bonus chapter refers to an investigation in the past, and we play a different but relevant person. The two stories are linked, but the bonus one takes place before the main game. It is certainly not necessary for closure, but does allow for the possibility of more Enigmatis stories to be told.

The chapter is conducted largely in scenes visited in the main game, some of which have been revamped. All the puzzles and HOPs are new. There is a feeling of dislocation because you are now playing the part of a man, instead of the female detective of the main story.

There is also a feeling that not as much effort was put into the making of this game. In parts, the graphics are a bit grainy, yet in others they are different, more cartoonish, than in any other part of the game, and decidedly better than the rest. And there is some sloppy translations in the HOP lists.

Other CE extras include, in game SG, wallpapers, movies (including those tremendous introductory ones), concept art, music, and replayable Hidden Object Puzzles.

I was given this CE version for free, so it is no loss to me either way, but I think there is enough in the main game to satisfy a player, and the extra dollars for the CE are not justified by the bonus content. Still, if you prefer CEs I am sure you’ll like this one.

Actually I tried to, but got "cannot be reached at this time" or whatever. Will probably try again tomorrow
Sponsored content