Following a sudden earthquake, Seb must escape a crumbling skyscraper. Along the way he will make some intriguing new friends, and together they might just unravel the sinister origins of the 'quake, assuming they can evade the mysterious stalker in close pursuit...

Starting at the top and working down, the game's 90+ levels take place inside the skyscraper. The player creates words on a grid of letters and obstacles, clearing a path for Seb and friends to descend.

Give your brain a workout with this charming word puzzle game. 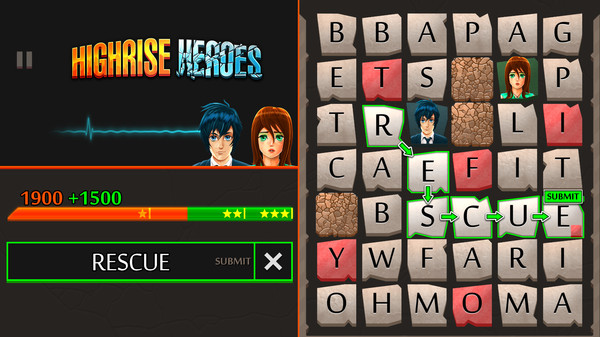 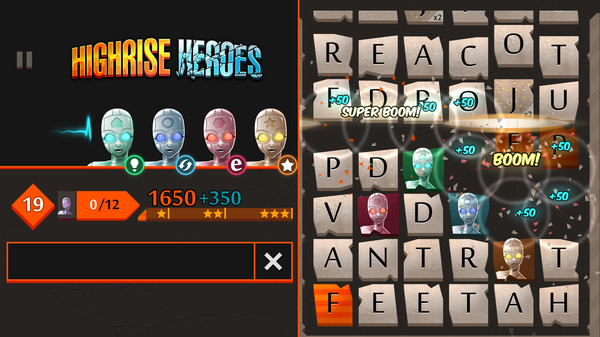 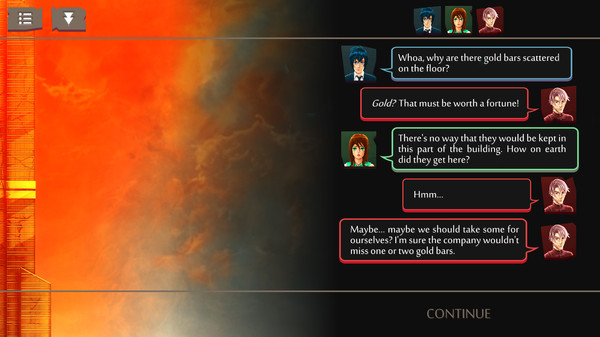 The first thing you see upon entering the game is Story Mode and Chimp Challenges.  Once you choose one, you'll be able to access Settings.  Options are separate mute buttons for music and sounds, plus Windowed mode or full-screen.

Gameplay consists of chaining together letters to form words, usually with the goal of dropping everyone to the bottom of the screen to "save" them.  When you include the characters from the story in a chain, it will give you access to letters you otherwise wouldn't be able to get to, but there's more to it than that.  Characters will soon run out of air if you don't use them in a word with an air (blue) tile, there are battery cells that have to be used within a certain number of turns, or they'll explode and everyone will die from toxic gas.  There can be fires to put out, debris to clear, and/or glass to break before you can move on, and you only have a certain number of turns to save everyone!

Each character has an ability that will help you out of a tight spot, ranging from instantly breaking a tile that would otherwise take 3 turns to destroy, to swapping letters on the screen, to showing you the longest-possible word on the screen.  SUPER-helpful... but use these abilities wisely, as each time you use them, you'll lose a certain number of turns!

Making 5+ letter words will give you a small red bomb, which takes out all of the tiles touching it (8 tiles), and making a 7+ letter word gives you a large gold bomb, which will take out an additional row of tiles surrounding it (24 tiles).

The early levels will give you hints if you stall for too long, but no worries... That doesn't continue once you progress in the game, and neither does the super-easy-to-pass nature of the levels. Every word you make gets you points, and of course longer words give you more points.  Chaining together multiple characters in a word will net you some bonus points, and there are also some tiles that include multipliers.  If you're an achievement-hunter like me, simply passing a level isn't good enough, as you're going to want to get the most points possible in order to get three stars, and if you're competitive, there are leaderboards for each level, too!

All levels have a hidden timer for the purpose of stats, but there are a good 10 levels (that's a guess) that have a visible timer, and which you have to complete within 2 minutes or less... and a few of those levels have number tiles instead of letters, with challenges such as "Link tlles to add up to 40."

Every level has a goal that must be met before you can move on, and 64 of the levels include an additional challenge in the form of "banana" challenges.  An example of a banana challenge would be, "Make a 6+ letter vowel-heavy word."

The story was surprisingly interesting for the most part, and although I had figured out an important point pretty early on in the game, there were some surprises thrown in, and I found myself rushing through the latter levels just to see how it would end... And there came another surprise!  There are two possible endings!

Overall I found Highrise Heroes to be a delightful word game, with an engaging story and nice bonuses.  I love the achievements and extra challenges to complete, and the difficulty level -- once you get past the early stages -- was enough to make me re-play over and over again to get my three stars, but (with the exception of the number levels) not enough to make me want to pull out my hair.

Definitely recommended to lovers of word games, the competitive, and those who love achievements (eventually, I'll have them ALL!  I WILL defeat those number levels!)  Muwahaha!