Stuck in a remote, abandoned town, you must lead five survivors with conflicting motivations, fragile relationships and fiery prejudices to safety from the roving undead. A sophisticated engine generates new survivors, towns and content so every adventure is a different experience, and you can use built-in editors to add yourself and others to the game.

Zafehouse: Diaries is a fresh take on the zombie / survival horror genre. If you're sick of mindless shooters or generic-looking top down affairs that just don't get what the zombie genre is about, this is the game for you. 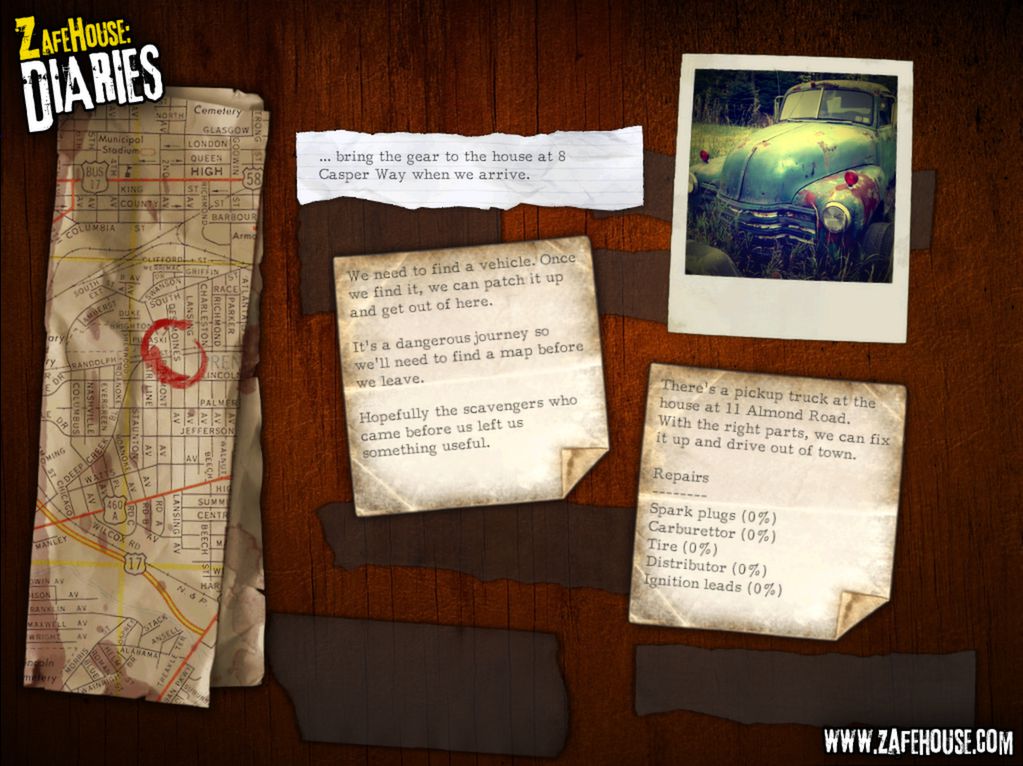 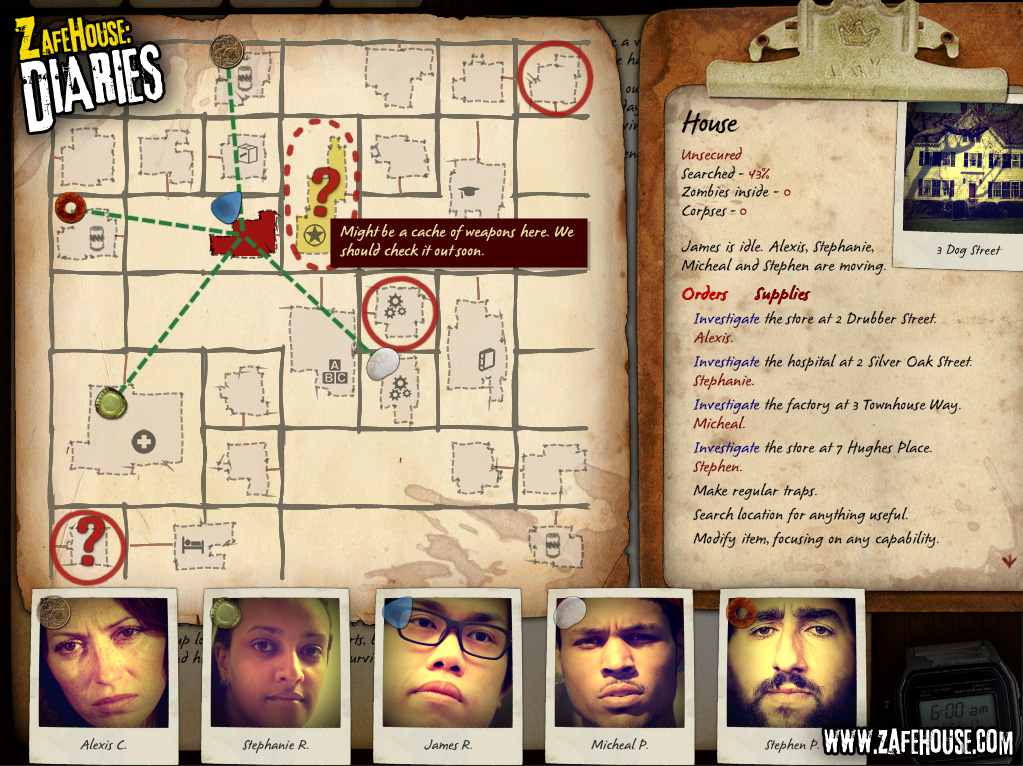 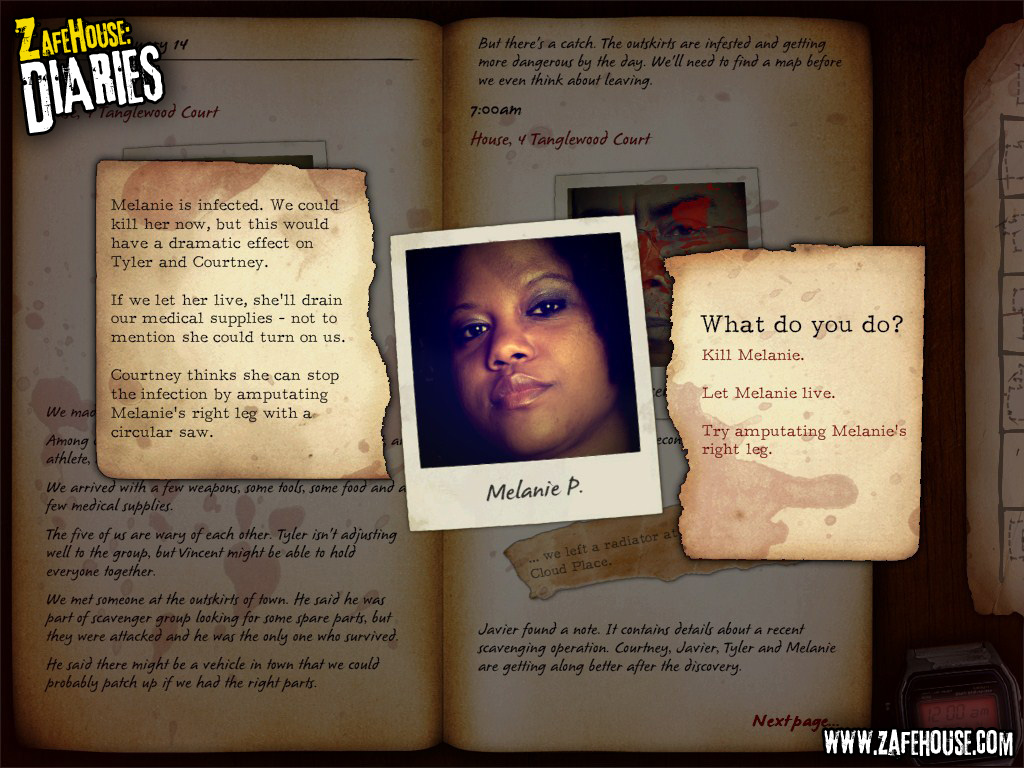 Music, Sound, and Special Effects can all be disabled.  Windowed mode is default, but it can be stretched to widescreen.  It worked great for me in full-screen mode, but when Alt-tabbing out of the game, everything looks bigger than it's supposed to be.  Results may vary~

When you make changes between full-screen and windowed, you'll have to exit the game and re-enter for the changes to take effect (or at least I did.)

There are three different modes of play:  No Survivors (Easy), Road Kill (Normal), and Deadline (Hard).  Each difficulty is clearly explained when you start a new game.  What I didn't realize until writing this review is that there are also options for difficulty.  There are a lot of choices, so I'm just going to give you the visual effect 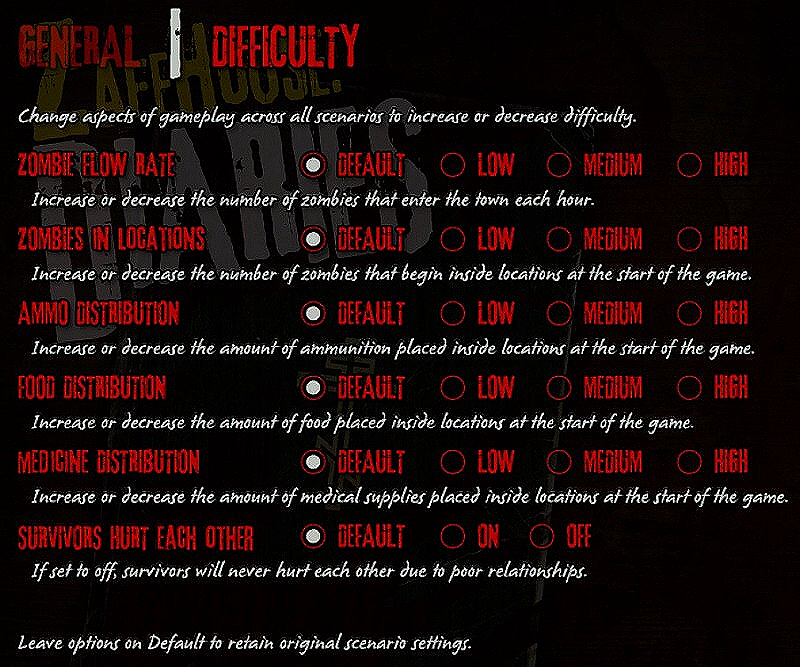 Now that we're done with the boring stuff, let's get to the game, which is... boring?

WHAT?  Boring?  Hell no!  Every time I looked at Zafehouse, I thought it looked interesting, but those screens... They just looked so... Not fun.  I couldn't have been more wrong!  I've enjoyed every aspect of the game.

I really like the music and the sound effects, as really help to set the tone, and sometimes let you know that you're in trouble, too!

The graphics are a bit stark and simplistic, but that works with this game, in so many respects.  This is a world overridden with zombies, and those "boring" graphics just WORK with the theme.

There is a lot of reading to do, but in small chunks that bring you deeply into the story without overwhelming you with walls of text (like my reviews?  Hmm...

The way the game is played is pretty simple, but when you're new to the game... What the hell am I doinnnnng??  I don't know about you, but I don't want to read a game manual, I want to play!  It's this that finally got me to wanting the game:

I highly recommend checking out this series.  Just the first video will give you the basics of gameplay, but I kept watching because I found it fascinating seeing how different the guy's choices were as compared to the ones I'd have made.  If you watch the video(s) it will be obvious, but just in case, here are some basics:

Each character is assigned a symbol, and you can move the characters to different places by picking up the symbol and dropping it somewhere else on the map, board game style!  When you send a character somewhere, you have three choices:  Investigate, Breach, and Assault.  Investigate is self-explanatory, but here's what the others do:  Breaching means breaking into the house (or wherever).  If you've chosen Breach, they're in for the long-haul, and you can't cancel it even if they realize that there are dozens of zombies in the house.

Assault means that your character is going to go and kill any zombies outside of the location, and whatever they can kill through the windows, too, if they have ranged weapons to do so with.  Just choosing one of these options is not enough!!  TIP (because it's not immediately clear that you can do so when you're playing the game):  Be SURE to take some items with you!  If you're investigating, maybe take a flashlight and/or binoculars, if you're assaulting, weapons are a good idea.  When you're breaching, you might need something to help you break into the place!

This is a permadeath game... kind of.  When you first start out, you'll make a lot of mistakes, and have to start over again quite a bit.  That's all part of the learning process!  At some point, though, you're going to get vested in your characters and want to save the game.  Well, you can save the game... after all, how much fun would it be if you could never turn off the game and do other things?  Thing is, if all of your characters die, that's it, you can't reload... BUT, as long as ONE character is left living at the end of the turn, you can reload as many times as you like

I know that I'm forgetting to mention things -- possibly a lot of things -- but it's late, and I really need to get to bed.  Hopefully I can expand on this tomorrow and/or this weekend.  In the meantime, suffice to say that I love the game and highly recommend it!