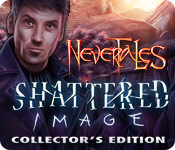 Your daughter, Alice, has grown up to be a talented young girl – unlike other Travelers, she has a rare gift that allows her to open portals using reflective surfaces, not just books. But when a mysterious mirror-hopping monster suddenly appears through one of the portals and kidnaps Alice, the entire world starts splitting apart at the seams. Strange quakes rock the earth, and huge chasms appear out of nowhere. Now you must use your own powers to travel into Book-worlds and find the source of the trouble. Can you rescue Alice and save Taleworld before it falls apart? Find out in this thrilling Hidden Object Puzzle Adventure game!

A Bit Easier, But Still Magnificent!*****

IN BRIEF
Not very interesting or visually spectacular intro, although makes a nice story set up for the series. Don’t remember that from first one.

SIGHTS & SOUNDS
Graphics look gorgeous, clear and delightful art, both in the locations and the HOPs. Music is uniquely lovely.

WHAT’S HAPPENING?
You, your husband and your daughter are all “Travellers”, able to move between different worlds through the use of books. Daughter can travel with mirrors. 12th birthday, daughter first goes into coma, then gets grabbed into another world. Interesting thing, husband was actually useful for about 5 minutes, and in at least one instance, you get to play him.

GAMEPLAY
A good variety of puzzles, mini-puzzles (like inventory-assembled items) and HOPs. The HOPs are quite different from each other. All have morphing object in them. There are interactive word lists, progressive find and use, unique matching pairs, replace items in scene, and find pictured type of item. E.g. a flower x3. They will all be flowers, but won’t all look the same. There are some other nifty gimmicks in them as well. Some of the HOPs actually advance the story or provide back history as you complete them.

Other puzzles and general game play are much easier than first Nevertales, so far. But it still took me just over an hour to complete the demo. There is a handy interactive jump map with objectives available and completed scenes, a journal with notes, achievements and objective list. Hint is directional. 3 levels of difficulty plus custom. Aspect correction. 4 sound sliders. Lockable inventory bar. Game timer.

A couple of extras. Alice’s dollhouse has lost its rooms. You find them as you play. They are her means of communicating with you.

CE BLING!
A lot of collectible book symbols, one per location, and there is an indicator for them, plus morphing items in the HOPs. The gallery includes 20 wallpapers, roughly, and about 14 ‘before and after’ concept art sketches. There are 10 musical tracks.

Additional gameplay includes 17 HOPs which you unlock as you play them. There is also a treasure hunt game to ensure you have all the collectibles, and a Tower Defence game. Plus, the usual bonus chapter and hidden chapters opened when you have played the treasure hunt game.

There are achievements, which can be accessed through the journal, and cover performance and story.

COMBINED IMPACT
This game isn’t blowing me away as much as the first one did, but, to me, it is still better because it is easier to play. I found the first one a bit tough, which detracted from my enjoyment. I think this is an extraordinarily good game, and with so many extras, I wouldn’t dream of buying anything other than the CE.

PS. Big improvement on the beta of this game!