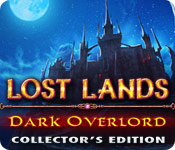 Susan had just stepped away to answer the phone, but when she returned she saw something pulling her son Jimmy through a shimmering portal. It closed before she could pull him back. To save him, she must find a way to this other world. Before Susan lies a world that no one else has ever seen before... a world where magic is real and anything is possible. Find out who took Jimmy and what they want in Lost Lands: Dark Overlord!

Doesn’t Quite Have What It Takes***

FIRST IMPRESSIONS
The intro to this game, while realistic, is a bit lacklustre I think. I would have added extra drama up front. The game is a bit that way in general. I can’t put my finger on it, but it somehow doesn’t seem to involve or intrigue. It has the right ingredients, just no pizzazz, maybe?

SIGHTS & SOUNDS
The cut-scenes are well done, even if a little boring, and the graphics in general are good. A bit too dark, I would say. Nothing here to complain about though. The art is not bad, but not inspired. I do like the gnomes. Some of the animations are shoddy. At one stage we dig for something, and the movements of the shovelsful of dirt – terrible. The voiceovers are good, the music totally forgettable. And I don’t remember much in the way of ambient sound either. Which is a shame, perfect place for it – murky creepy swamp.

WHAT’S HAPPENING?
A strange tree grabs your son Timmy when your back is turned, and drags him inside itself. You do the only thing you can, you let the tree swallow you up as well. You land, unharmed, in a totally unfamiliar place, and some shadow? is making off with your boy. You cannot immediately follow, because the bridge is broken, and in your efforts to solve that dilemma you save an owl being bullied by crows, and meet a helpful and knowledgeable gnome. Together the three of you must appease the Spirit of the Lake – something of a surprise there – in order to get out of the swamp.

GAMEPLAY
A couple of the nicer touches in this game first up. Something I’ve not seen before and wholeheartedly recommend to other developers, a fixed back arrow in the middle top of the inventory bar, so from anywhere or anything, backing out is simple. A splendid innovation! And a solution to all those games that frustrate us with the awkwardness of the back arrow. Another nice one, the dagger we get when we first arrive in the strange land we get to keep. And use frequently.

The game also has those other things we’d like to be able to take for granted. Lockable inventory bar, 3 levels of difficulty in which you can toggle specific features on/off, directional hint and interactive jump map that shows available tasks. If you wish, the map will also show you where the collectibles are, or you can toggle it to be indicated with the cursor within the game. A useful journal and a task list.

There are plenty of puzzles, all of them easy even for me, so very easy. None of them take very long and do not slow down the pace of play. There are only 2 HOPs in the demo – a progressive silhouettes game and a replace the items game. There is a reasonable amount of to and fro, and the adventure play is a large component of the game. It too is very easy, fairly obvious at all times.

CE BLING!
There are an odd bunch of collectibles (8 or 9 each of snails, pine cones, skulls and gold chains), and 24 achievements. The usual SG, bonus chapter and gallery items – Wallpapers (9), Concept Art (9), Videos (16), Music (6). There are replayable Mini-Games (27) – this doesn’t include HOPs, which apparently you cannot replay.

COMBINED IMPACT
I don’t think it cuts it as a CE myself. The graphics just aren’t that good, the gameplay just isn’t quite that interesting, the story isn’t all that involving. None of the CE Bling! is essential to my happiness. Personally, I would certainly be waiting for the SE before I bought.

I don’t recommend this game, as a CE! or

I do recommend this game, as a SE! (take your pick

This is a gorgeous, high quality title that I mostly enjoyed.

Options include separate sliders for Music, Ambients and Sound Effects; Resolution; Full-screen/Windowed, Custom Cursor, and - if you're playing on Steam - Cloud Sync.

There are three difficulties to choose from.  I chose to go with Hard, since there's an achievement for playing through on that mode... I thought that I'd only have to play through once to get all of the 'cheevo's that way, but I don't think it's possible to get them all in one play-through unless you use the Strategy Guide every step of the way :(

The aforementioned Strategy Guide is built-in, and gives you step-by-step instructions for everything - including placement of every object on your HOS!  The only thing it doesn't show you is the location of all of the collectibles.  There is one on every location in the main game (68 locaitions!), and there are multiple types to look for! ie. Skulls, pine cones, snails, etc.  If you're having trouble spotting them - and they ARE hard to spot! - there's a great guide on Steam, which you will find HERE .

We have multiple types of hidden object scenes to complete: Lists, placing things back in the scene, and by silhouette.  Really a nice variety to keep things interesting!

There is a jump-to map (interactive if you're not playing on Hard), but you can't use it over five times if you're going for all of the achievements :\  When you use a HINT, instead of giving your a directional arrow, it will pop your map open with the location you need to go to circled.  A time-saver for sure, but it makes it difficult to limit usage to 5 times!

Let's address that which lessened my enjoyment of this game.  In case you hadn't already guessed, it's the achievements.

There are 24 achievements to be earned, but I feel that some of them are unfair.  Besides using the map only five times, there are mini-game achievements for finding x-items in less than 20 seconds or completing a mini on your first try... Seriously?  It wasn't until I got into the bonus content that I found that I can re-play those minis to get the achievements, so I stressed every time one of them came up.

As a side note, the in-game achievements do NOT reset when you restart the game, so you don't have to worry about getting them all in one play-through.

The story seemed rather lackluster to me.  I found that I really didn't care about little Jimmy or the evils of the land.  For this title, the enjoyment came from the gameplay.

This is a grade-A title - excellent in every way - whose enjoyment was lessened for me due to my achievement-hunting nature.  It's gorgeous, the gameplay is interesting and varied, there is a ton of things to see and do... If you're an achievement-hunter like me, just try to let it go and enjoy the game.  After all, it is a quality title to be enjoyed!
_________________
Never be a prisoner of your past.
It was just a lesson, not a life sentence.