Available at:
Big Fish for PC and Mac
GameHouse for PC
Alawar 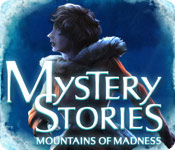 Explore a terrifying tale in Mystery Stories: Mountains of Madness!
Find out why an entire expedition team is dead at the foot of a  mountain range in this incredible Hidden Object Puzzle Adventure game. After finding the team, Lynn Morgan decides to cross the range to  discover the circumstances surrounding their death. Based on the  masterful novel by H.P. Lovecraft, Mystery Stories: Mountains of Madness takes you on a journey you’ll never forget!

I did not realize that this was the third in a series until I came to post my review!

With it's refreshingly-different graphics style, an interesting story and appropriately dramatic (but not overpowering) music, the game drew me in almost immediately.

Options include sliders for music and sound effects, plus custom cursor, the ability to switch back and forth between easy and expert mode, full-screen and a box to choose your screen resolution (ie. 1024x768, etc.) There is also the option to turn off the effects for those with slower computers

There is no random-click penalty.

The game starts out in the uninhabited tundra, cold and desolate in its beauty. It wasn't long before I realized that this game is very reminiscent of The Thing, with Kurt Russell - a movie I have long wished to be able to play as an IHOG or adventure game! Happy day for me, I got a combination of the two, IHOG and adventure!

Don't let me mislead you - the game does not follow the storyline of The Thing, but it is reminiscent enough in feeling that I am a happy camper.

The gameplay itself is more adventure than HOG, also a plus. When you do have HOG scenes, you will end up keeping several items from the area, not just one item (as is the norm for most HOG's). You may have 30 items to find in one scene, but only eight items will be listed at any given time. This adds to the difficulty a bit, as randomly guessing what's on the list won't do you much good. Items will not just found via list, for you will also find them by picture. There are no pencils floating in the sky or ridiculously out-of-place items, and no teeny-tiny items to contend with. Also noteworthy of the HOG scenes is that items you've removed previously will not be present when you have to return!

Gameplay is intuitive, but in case you need help, you have three choices! First, there is an Advice button, which will give you a general hint. If you hit the Advice button a second time (in the same area), it will give you more specific advice. Then there's also a HINT button, which definitely helps if you can't find a missing object during the adventure portion, and of course during the hidden object scenes. The HINT button will also tell you which direction you need to go if you're confused. (LOVE it! Thank you for the tiered hints, devs!)

We have a journal, but it doesn't have a bunch of writing that you'll have to follow - it is more to remind you of where you've been and what you've done - images and scraps of information you may have gleaned. Once again, thumbs up to the devs, for there are no unsolicited hints in the journal!

The mini-games are perfectly in keeping with the game and the story, and have a SKIP button, if needed. Next to the skip button is a ?, which will give you the mini's instructions.

Every now and then we will change from one character's point of view to another's - something I've seen done only in a few games, previously. It happens automatically, and does not interrupt the flow of the game at all... it seems only natural the way they've done it.

There are achievements in this game, but they are more to track your progress than anything else. You don't have to work hard or even try to get the achievements - they come simply by playing the game like you normally would. Still, it was a nice thought.

I really do enjoy the artwork in this game - it's quite beautiful, and there are some multi-layered scrolling scenes that add real depth to the game. If you do not like scrolling scenes, you can disable them. Doing so will simply meld everything into one static scene that you can see all at once. I must mention that none of the HOG scenes scroll (a good thing for me!)

I believe I'm getting near to the end, and it's been a real pleasure. Definitely a solid game, I recommend it

The story may be a familiar one - go find a missing colleague who disappeared in strange circumstances - but this one has a great new slant on it. It's set in what feels like Antarctica it's so unremittingly cold, and the bad guys are neither human nor ghosts.

There are two of you and a dog investigating, and a small amount of swapping to the other investigator occurs. There are quite a few scrollable scenes, but you have the option to turn them off. I didn't, they added to the immersive effect.

The HO scenes are many and vary with lists, 20x object X and pix of objects. I liked the fact that the HOs you find in one scene are still gone when you return (there's not a lot of that). Also, you get all you need from one scene, so if you need climbing gear, you'll find all of it in one scene and be ready to go. No traipsing from here to there getting them one at a time. The puzzles were also interesting.

The graphics are good but not astounding. The music is pleasant and unintrusive.

I liked the way you get assistance. In HO scenes, it's a hint, outside them, it's (useful) advice that gets more detailed and specific each time you click it. I did find I needed to use this function more than I like. The gameplay is not intuitive.

It's this and the fact that I'm still confused about exactly what happened with the previous expedition, that I don't give this a four.

Hey! I didn't know it was a series either!
genkicoll

This is one of my favorites.  I absolutely adored it.

You can read the H. P. Lovecraft novel it was based on for free (legally

) at ManyBooks.net. They have it in multiple formats.

Always glad to help. :)I wish game makers would find more old stories like that to adapt.

Guillermo del Toro has been trying to adapt this story into a movie for years, but sadly, it seems the project was killed because of budget cuts. :(

You can see his illustrations here:
http://io9.com/guillermo-del-toros-sketches-reveal-his-at-the-mountai-1150795662
Sponsored content