Enigmatis 2: The Mists of Ravenwood

Enigmatis 2: The Mists of Ravenwood

Enigmatis: The Mists of Ravenwood
by Artifex Mundi - September, 2013

Series links: Enigmatis 1: The Ghosts of Maple Creek, Enigmatis 2: The Mists of Ravenwood 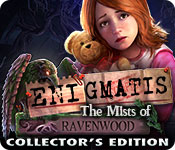 Two years have passed since the terrifying events of Maple Creek. For the protagonist, who witnessed those events, the past months have been a nonstop chase after the demonic preacher – the main perpetrator of the tragedy.
The latest clue to his whereabouts is a harrowing one: there have been reports of people going missing in the rural Pacific Northwest of the United States. The detective’s suspicions are confirmed when she discovers a deserted RV abandoned on a lone stretch of highway in the middle of the woods. Giant claw marks mar the roof, and the items scattered around the vehicle suggest there was some kind of violent struggle only minutes before her arrival.
All clues lead directly to the gates of Ravenwood Park, a mysterious heritage park which can’t be found on any map…
Behind the gate the detective is surprised by the beauty and placidity of the redwood forest, and the extraordinary kindness of its park’s residents. However, each step she takes gradually reveals more of the true face of Ravenwood Park and the dark secrets it holds - secrets insidiously linked to the events of Maple Creek...
Can she determine who or what attacked the owners of the abandoned RV and what became of those gone missing? Or will the detective become a pawn in a game of illusions, stretching far beyond the borders of our own material world?
Features:

It’s 2 years since the release of the first Enigmatis game (Ghosts Of Maple Creek). It was a superior HOPA in its time, and though our expectations have changed a lot since then, it is still a unique game. This game reflects those changes in production standards, while still keeping the very best of that earlier game. This is a sequel to it, but the other story is not needed, just recommended.

There is so much to say I’m afraid I’ll have to mention only the noteworthy points. Concerning graphics, sound and videos, maps, hints and skip, others can tell you all these range from good to great. The most important part of this game is the solving of the mystery.

These are the things I noticed:

• The intro and early part are repeatedly so exciting you may want to check your pacemaker
• There are 12 HO scenes in at least 3 styles – find & use objects outlined, fragmented objects that require some interaction, interactive lists. They are all a bit trickier than usual
• You can choose a challenging matching pairs game instead of the list HOPs
• There are 18 mini-games, all I saw were easy
• You must collect 26 pieces of evidence, which you will use in a game of deduction, in order to solve the mystery
• Your assistant in this game is a very long way from cute, or even trustworthy
• There are real dialogues (a lot of them, but all interesting and voiceovers are good)
• The demo was 2 out of 7 chapters. I ran out of time about ¾ of the way in.

The next are items I believe will only be available in the Collector’s Edition:

• Collectible butterflies (30) – hard to find
• Collectible ‘elusive’ (morphing) objects (30) – harder to find
• 19 backstory objects
• Achievements relating to all these plus the gameplay and the story, and the pieces of evidence
• Redwood Encyclopaedia
• Usual gallery items
• Excellent Strategy Guide
• Bonus Chapter

It is all so compelling that I am about to break my own rule and buy this CE immediately. I do not want to stop!
A genuinely thrilling game and no schmalz! (not that I mind schmalz, but variety is still the spice of life!)

Ok, JTF, I believe you sold me - and I don't, as a rule, buy CEs. The sale price makes it much easier though, lol.

Nup! Although there is a rather grizzly bear - sorry couldn't control myself. No no cuteness whatsoever, but birds and critters you can touch to make them fly off. And even the collectible butterflies are a single shade!
genkicoll

This game takes place two years after the events of the first game at Maple Creek.  It is not necessary to play the first game, but I highly recommend it.  After all, Maple Creek was really a good game, and you'll understand the background and implications of events in this game much better.

There are three difficulty settings to choose from: Casual, Advanced, and Expert.  The differences are clearly explained, and it's obvious that Artifex Mundi (the dev) has been listening to our pleas -- In Expert mode, "Text tips give less direct hints."   Very nice

I did go with middle of the road with Advanced, however.

The tutorial is optional.

There are separate sliders for Music and Sound, and we can change the difficulty level at any time via our options menu (thanks devs!)  We can also turn off the voice over, custom cursor, and full screen.  Widescreen is automatically supported, and it looks great!

Whilst playing the game, be on the lookout for "Ethereal butterflies."  These have a bluish glow to them.  Also look for "Illusive Objects," which are morphing items.  There are 30 of each to find, so plenty of fun for those of us who like hunting for these extra goodies.

There are achievements, and you can see what you need to aim for by entering the Achievements area via your options menu.  There is also a Help button in the options menu, and this gives ten pages of illustrated, clear instructions for those not familiar with this kind of game, and/or with the evidence board element we have in the Enigmatis games.

You will see a cutscene as you load the game, and a second one when you start to play the actual game.  The loading-game video is gorgeous, but if you're scared of rats, you might want to skip this one... or close your eyes when you hear squeaking, and wait to open them until it stops

The initial video (while the game is loading) is not necessary to understand the story -- It just gives you some information about what happened a few minutes before you arrive on the scene.

Your journal has three tabs:  Objectives, Notes, and Illusive Objects.  The first two tabs are pretty useless, at least for me.  There's no extra story in there, and the objectives are pretty clear. The illusive objects are pretty easy to find... for the most part! That's where the journal gets useful.  It tracks how many of the objects you've found, what they looked like, and the order in which they should be found.  If you see a '?' with objects that you've found all around it, you know that you missed an object in that specific area.

That brings me to the map, which is next to your journal.  It IS a jump-to map, but you jump to an AREA, not specific locations.  The map will show you which areas are "active" (only in Casual and Advanced mode,) but of course you don't know exactly which scene in that area needs to have an action taken.

Never fear, though.  Your HINT button gives a directional arrow, should you need it.

The hidden object scenes vary.  We have highly interactive scenes that are more like puzzles, interactive fragmented object scenes, and the more traditional HO scenes with lists of items to find.  Most of the traditional HO's are lightly interactive, with items listed in purple needing an extra step or two.  On the list-type HOS, you can press the Notes button to play a matching game, instead of finding objects.  The matching game isn't your typical card game setup; it's literally written notes that are scattered about.  Matching requires finding a related picture, ie. a notepad would match with a pencil.

The devs did an exceptional job with story in this one, using multiple methods to progress the story.  First off we have the cutscenes, which are absolutely gorgeous.  I was VERY happy to see that I could go back and re-watch these scenes once I finished the game -- there were two in particular that were beautifully directed and "filmed," and I really wanted to see them again.  Next we have story sequences that we gain as we find and place lock pieces on a particular door.  There are 12 of these story pieces, and all but the last can be rewatched at any time during the game (but not once the game is completed) by clicking on the piece(s) you've placed.  Lastly we have our Evidence Board.

What Evidence Board, you ask?

The Evidence Board is an inspired addition to gameplay which is only present in the Enigmatis games (as far as I know!)  As we play the game, we gather evidence.  That's nothing new, we do that in a lot of these games!  What's new is that we literally have a board where we can organize the evidence, and as we do, we come to conclusions that progress the story.

The whole game is voiced-over, and beautifully done.  Two voices in particular gave me chills:

Spoiler:
The ticket lady (after our first encounter with her), and of course the mysterious man behind the locked door.

The story is engaging, and the whole game entirely immersive.  This is truly a creepy experience, and I have to say that it's one of the scariest storylines I've seen in a casual game.

It IS a scary game, but the devs injected some humor... Woohoo~!!  A Monty Python reference!  *starts whistling the lumberjack song *

(added a link so no one would miss the joke!) hehehe

To play the Bonus Chapter, simply click on the Play button on the main menu -- you can now choose between replaying the main game, or playing the bonus chapter.  This chapter takes place approximately 30 years previously, and is played from the

point of view.  If you've played the main game, you know how that story is going to end, but it's nice to see how things came about.  On the plus side, we actually have a reusable pocket knife on us during the whole chapter!

The devs did such a beautiful job with this game that I have only a single gripe, and it's really a pet peeve.  As a matter of fact, I'm going to put it in spoiler tags just in case y'all didn't notice.

Spoiler:
My gripe is this:  The artists chose to use the same color palette for Every. Single. Scene!

It doesn't matter if we're inside, outside, underground, or decades in the past, every scene has the same purples and greens. *sigh*  Continuity is of course important, but you can have the same style without using all the same colors!!

Overall, this is an exceptional game in every way, and I thoroughly enjoyed it from start to finish!

Thanks, Justie!  It took me four or five days to get out everything I wanted to say... there's just so much! (as evidenced by my novella-esque review

I remember when I first started university, I was horrified to discover that I had to write a minimum of 1000 or sometimes even 1500 words per essay!!

Now, I desperately try to keep it down to 500 words so I can fit it on one post at the pond. Mind you, I'm getting fairly fed up with that.

AND I have to wait til the moderator decides to open the forum. It's getting tedious.
Sponsored content