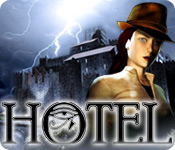 Help Detective Bridget Brightstone crack the case and reveal the great mystery that lies behind high walls of the Bellevue Hotel!  Meet the ancient Egyptian cult in a search of almighty artifact, Marcus Antonius, King Arthur and many others who tried to keep this powerful object hidden away! Stop the evil that is raising from its grave from using the artifact’s powers to conquer the world in Hotel, a fun Adventure game.

This casual adventure by Cateia Game, who also brought us games like Kaptain Brawe: A Brawe New World, The Legend of Crystal Valley, and Where Angels Cry.

We have separate options for audio and video settings, including rendering, shading, anti-aliasing, screen resolution (up to 1920x1080), music, speech, effects, ambiance, footsteps, master volume, etc. There IS a HINT button, which will show you any "active" areas on the screen. There is no directional arrow showing you which way to go, nor any pop-up giving you a hint - that's IHOG territory, and not to be found in a "true" adventure.

From the title you can see that this is a 3rd person adventure, meaning that you can see and control the main character. A big complaint in this type of game is that people get frustrated waiting for the character to cross the screen (etc.) Frequently you will find that holding down the space bar will make the character move much faster, but Cateia has taken it a step further: Hold down the space bar to speed her up, yes, but you can also double-click to instantly move to any location you've already visited (wish this option had been present in Legend of Crystal Valley! >_<) On the downside, each new day you will have to walk her (or super-walk her!) to scenes you've been to before, but once you do, you'll have the insta-transport again.

The story is solid, with hints of the paranormal towards the beginning. There's a definite transition to the mystical, so if you're uncomfortable with that kind of thing, this game is not for you. Since I love the genre, I enjoyed it very much.

The story actually took on a very familiar feeling, but I'd ruin it for you if I told you what movie it reminds me of. Suffice to say, it's a movie franchise that I positively love, and not so similar that I knew what would happen next

As far as difficulty level goes, there were definitely times when I didn't know what I was supposed to do, but ultimately the answer was pretty obvious. The mini-games are pretty simple, and to be honest, there are very few true adventures (of this type) that I've finished over the years... there may just be one (Legend of Crystal Valley). lol~ 'Course in the old days, they didn't have internet, nor easily-accessible walkthroughs

This is a good adventure for beginners to the genre, and likely a nice distraction to the move experienced. Recommend giving it a try