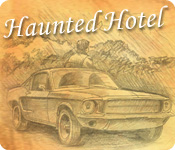 After crashing his car on the side of the road, a bewildered traveler finds himself checking in to the Haunted Hotel! In Haunted Hotel,  you must explore frightful floors full of spooky rooms to find Hidden  Objects in creepy crevices. Immerse yourself in a thrilling adventure  full of mysterious mini-games and addictive Hidden Object game play!

Considering how old this game is, it's not bad. Not great, mind you, but not bad... as long as you don't mind a lot of reading.

Read a few pages of text, play a few hidden object rooms, play a couple of easy (non-skippable, timed, fast-click!) mini-games, then into the elevator to the next level of the hotel.

The music is almost non-existent, except during the text/reading portion. For the rest of the game, the "music" is a constant spooky sound effect - it quickly becomes distracting.

HOG scenes are timed, but at 20 minutes a room, they might as well not be timed at all. Typical "find objects on a list" scenes, but there are also 3 bonus items per room, which are found by shape. The first and third bonus item you find will give you extra time for the room; the second item will give you an extra hint (assuming that you have less than five when you find that second item). With only five hints per level of the hotel (and there could be four rooms to look through), you'll want to strategize both the use of hints and the finding of bonus items.

The story is interesting enough that I've finished 8 levels thus far, but I find myself hoping that this is not a long game. So-so game with adequate artwork.
JustTheFacts

I imagine this game must have been quite something in its day (Jan 2009). The production values are great. The graphics are adequate even by today’s standards. The gameplay is a classic example of the way HO games used to be played. Dated, yes, but appealing all the same.

The one thing that will really put a lot of people off, but which I find endearing, (partly because no developer would be brave enough to do it these days) is the extensive prologue and subsequent instalments of the story. The story is told by a diary, each line appearing at about reading pace. There is of course no voiceover, and after the intro cut scene (excellent comic graphics), all the action is narrated threw this method. During each chapter thereafter there is also several pages of story that take longer to read sometimes than the chapter takes to play.

But it is a fine story. A traveller is involved in a car accident and ventures down the road to a hotel in search of assistance. When he gets there the place is deserted. The more he looks around, the more he discovers mysterious and ominous surroundings, strange phenomena and terrifying screams. This is the stuff of the diary. The game itself is pure HO, so you must read this to get any sense of progress.

GAMEPLAY
Each level has a number of mini-games you must complete in order to move on. These include puzzles like untangle ropes and a variety of arcade-like mini-games. Within the demo, these are not too difficult, but I anticipate a time when they will be. Which makes the fact that there is no skip for some of them, and that everything is timed, daunting.

The increasing number of ‘rooms’ (HO scenes) in each level require you to find an ever increasing numbers of items from a list, as well as some bonus items that get you power ups such as more time. You get five hints per level.

My one major criticism is that the background for the listed items is too ‘busy’, making it difficult to read the words.

This game is certainly not for everyone. Many would actively loathe it. But if you’re feeling nostalgic for the way it used to be, when HOGs were as challenging and high stress as any other casual game, then this could well be your thing. It is also fun to see how this series started and how it evolved to what we love now.

However, unless you're an antique collector, ...

This is a game that I got for free, and at first I liked it -- I love having a lot of story in my game, and I really wanted to see where it went -- but I quickly developed an active dislike for the game.  Even my interest in the story would not let me continue, and I uninstalled, never to look back.
_________________
Never be a prisoner of your past.
It was just a lesson, not a life sentence.