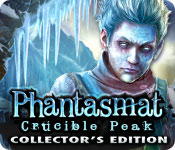 A disastrous avalanche... an evacuation... and mysterious residents who turn cold right before your eyes... literally! In this sequel to the classic hidden-object puzzle adventure game, you’ll find secrets buried under an avalanche of snow in Phantasmat: Crucible Peak.

You planned for years to ski the Alps, but your dream vacation turns into a nightmare when you stumble upon a resort town, lost five years ago in an avalanche. Uncover the mystery of what happened here. Did anyone ever really survive? 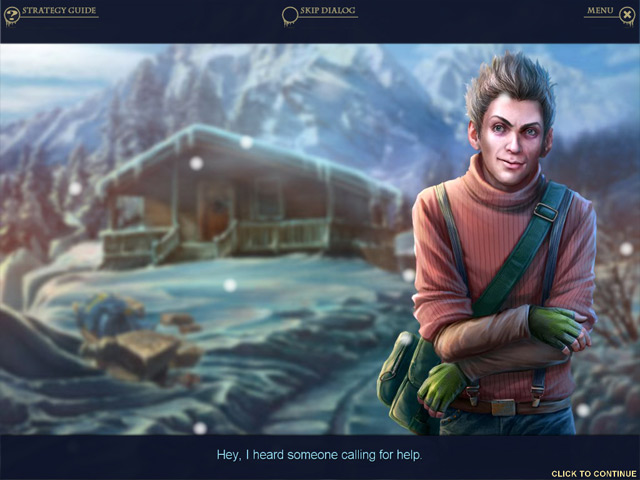 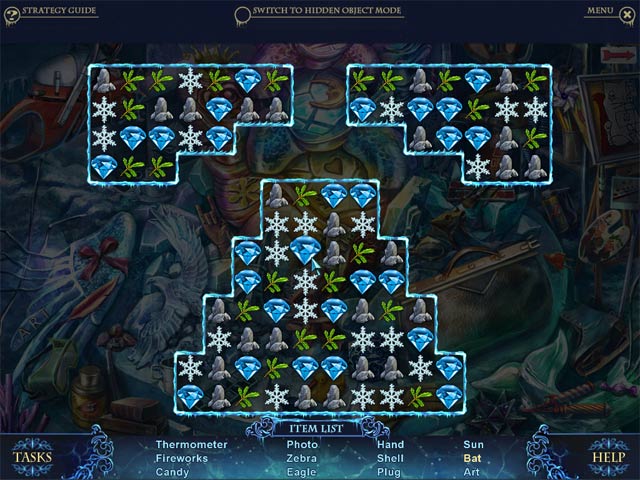 The first game in the series - called just Phantasmat (not available on Steam) - was by a different developer, and is also my most-played IHOG ever.  I tried not to let my love of the original color my opinions of this game, however!

Options include separate sliders for Music, Sound and Voices, Custom Cursor, Full-screen and Widescreen.  Choice of Casual, Advanced or Hard Mode.  Can be changed at any time.

This is a standalone story.

You've dreamed of skiing in the Alps for years, and when you finally take that vacation, an avalanche nearly takes you out, stranding you in the bitter cold wilderness.  You manage to find a nearly-abandoned village, but it quickly becomes apparent that there's something very wrong here...

There is no Journal, but we do have a task list that we can use to help us keep track of things.  It does NOT record any kind of puzzle hint, so you're going to have to write a few things down!

OK, let's get the logic issue out of the way right off the bat.  There was only one face palm moment early in the game, and everything else had a reason... They even had us turn off the electricity before repairing some wires.  How awesome is that!  You have no idea how much it bothers me when devs expect us to repair LIVE wires - without gloves, no less! Especially when they're sparking! lol~  Very happy to see that ERS added some logical thinking to the game AND told us why things we might try wouldn't work!

There's one action that we do multiple times, which is to use a butane torch to cut things out of the ice.  TIP: Release the button when you've completed the job, or this will take you WAY longer than it needs to!

Using a HINT during the adventure portion of the game will net you a text hint with exact locations and what you need to do there.  There is no directional hint.

We have no MAP and no fast-transport, but luckily, active locations are usually kept to a small area so that we don't have to do much backtracking.  It seemed like this was a little harder than your typical IHOG, as I seemed to have to use the hint button more than usual.

Phantasmat was the very first game to offer something to do instead of a HOS, and this second installment is continues with that trend.  You can switch back and forth between hidden objects or a Match-3 game (I'll come back to this.)  Hidden Object Scenes are lightly-interactive, and are standard junk piles.  These repeat once, but they are spaced pretty far apart.

The Match-3 game you can do instead of a HOS is almost a full-blown M3 all by itself, with plenty of helpful items, frozen blocks, etc.  Bring a golden eye to the bottom of the M3 screen to remove one item from your to-find list.  Power-ups ALSO need to be brought to the bottom of the screen before you can use them.  One thing the tutorial doesn't tell you is that matching four or more blocks at once will randomly "charge" blocks on the screen with hard-to-notice red dots.  Make a match with one of these and be rewarded with a lovely (but unobtrusive) explosion. Ka-boom~!

The game had a nice balance of adventure to hidden objects, but I'd say it leans more heavily toward the adventure side.

The graphics are very nice, although they felt cartoony after the last IHOG that I played (Maze: Subject 360).

The voices were well done, though I have to admit I don't remember the SFX or music.  I take that as a good thing, since it means that they suited the environment and didn't feel out of place.

A couple of things of note RE: our Toolbar area.  First is that if you unlock the toolbar, it will fade out so that the HUD is barely visible - Great for taking screens!  The second is that magnifying glass next to the hint button.  Clicking on the magnifying glass will shrink the size of your inventory items so that they aren't as big.  Not really sure what the point is, but there you go!

The game completes with a "The End?" and is continued in the extra chapter.

The bonus chapter seemed like it had more HOS than the main game, and it also felt pretty short, even though it was around the average of one hour.  It is a prequel of sorts (not exactly), but will give you a little bit more information on the town and its inhabitants.

There was more backtracking in the extra chapter than there was in the main game.

It's hard not to compare this to the first Phantasmat, but some of the core game and tale-telling mechanics are similar enough that I couldn't quite break away from my bias.  I'd say that this is a good game, and really liked that I could play it as a Match-3 adventure instead of as an IHOG.  Recommended!
_________________
Never be a prisoner of your past.
It was just a lesson, not a life sentence.