Available from
BFG for PC and MAC
GameHouse 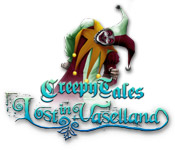 Save your sister from an amusement park in Creepy Tales: Lost in Vasel Land! After Calla goes missing, it’s up to you to find her! What once seemed
like a great time at the park turns into a mysterious and horrible experience. Help Rachel find her sister by exploring gorgeous Hidden Object scenes and learning the truth of Vasel Land! Track down the magical mirrors and use them to stop the kidnapper in Creepy Tales: Lost in Vasel Land.

I was determined to try out this game for myself since it's been getting
such bad reviews, hoping that it would end up being an unexpected gem.

Well... the game does have quite nice (albeit dark and sometimes dingy)
graphics, and the story is somewhat interesting, but I'm afraid I can't
say that this was what I had hoped it would be.

Some of the screens are indeed too dark, which I can handle, but couple
that with counter-intuitive game play, and I get disinclined to play in a
hurry!

I do love the back-and-forth in IHOG's such as Dire Grove or Mystery
Age: Dark Priests, but in this game, you are completely dependent upon
the map (looks to be a journal), lest you wander around in circles.

Add in the fact that the localization is poor, and you have a game that
made me too impatient to give it the full demo time. I might have
lasted 20 minutes before I gave up.

I think this could have been a really good game - I wish they had done some focus testing before they released.