Match cards, rescue Faeries, and raise Magical Pets as you explore the many and vast enchanted worlds of Faerie Solitaire Harvest!

See the Faerie World with 40 locations, 360 unique layouts, and 32 pets to hatch, evolve, and collect!

Faerie Solitaire Harvest is a match-2 solitaire card game. This means you match two cards of the same value to clear them from the board. King with a King, Ace with an Ace, and so on. Don't let the apparent simplicity fool you, there is still depth, strategy, and luck involved in this game. Faerie Solitaire Harvest is designed to be fun no matter how you choose to play it.

If you've played match-2 solitaires before and were unimpressed, let Faerie Solitaire Harvest be the game to change your mind about how good this kind of game can be!

Adventure mode where you save the faeries and make new friends

Just the right amount of relaxing fun and challenge

Suitable for all ages 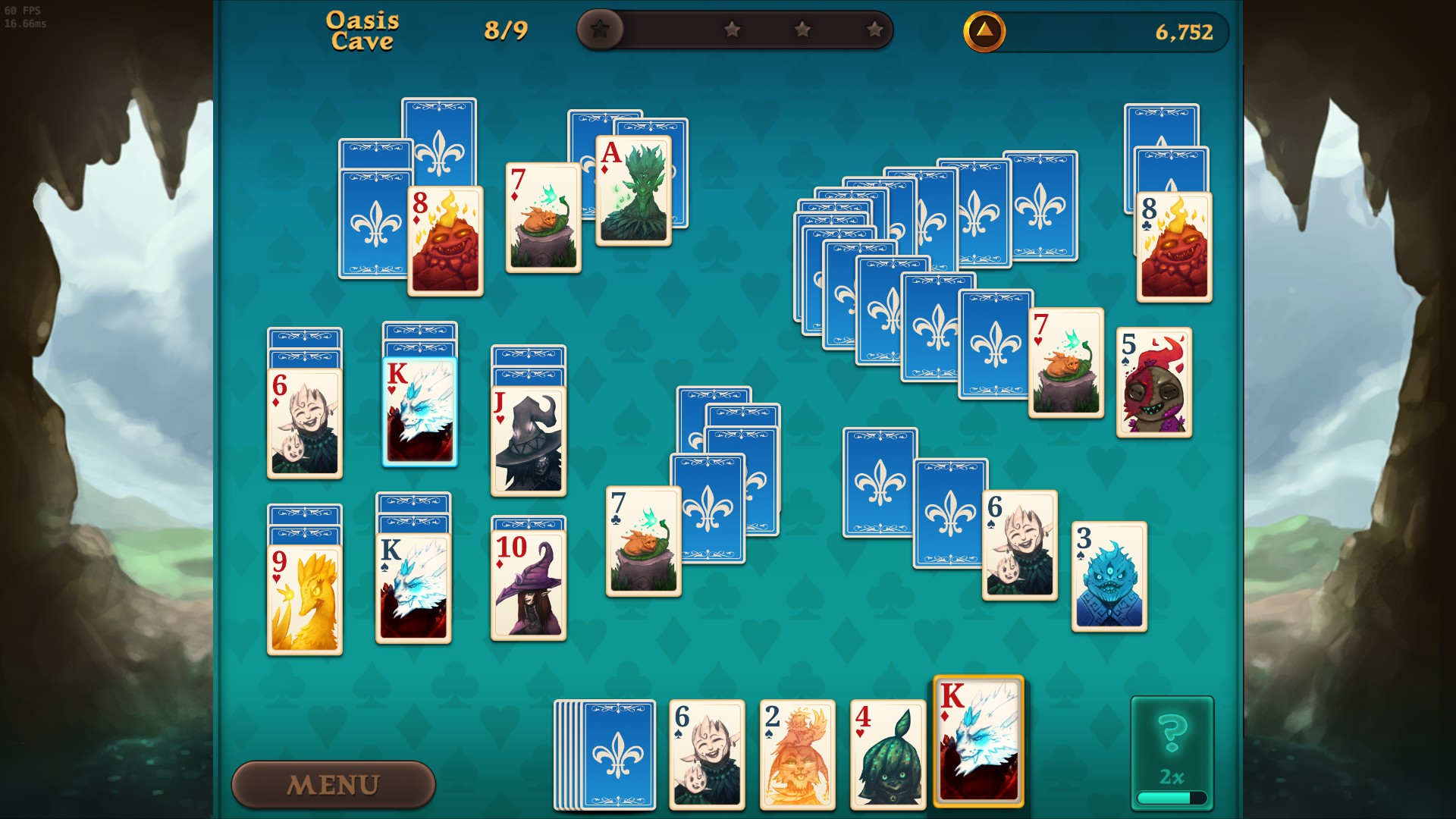 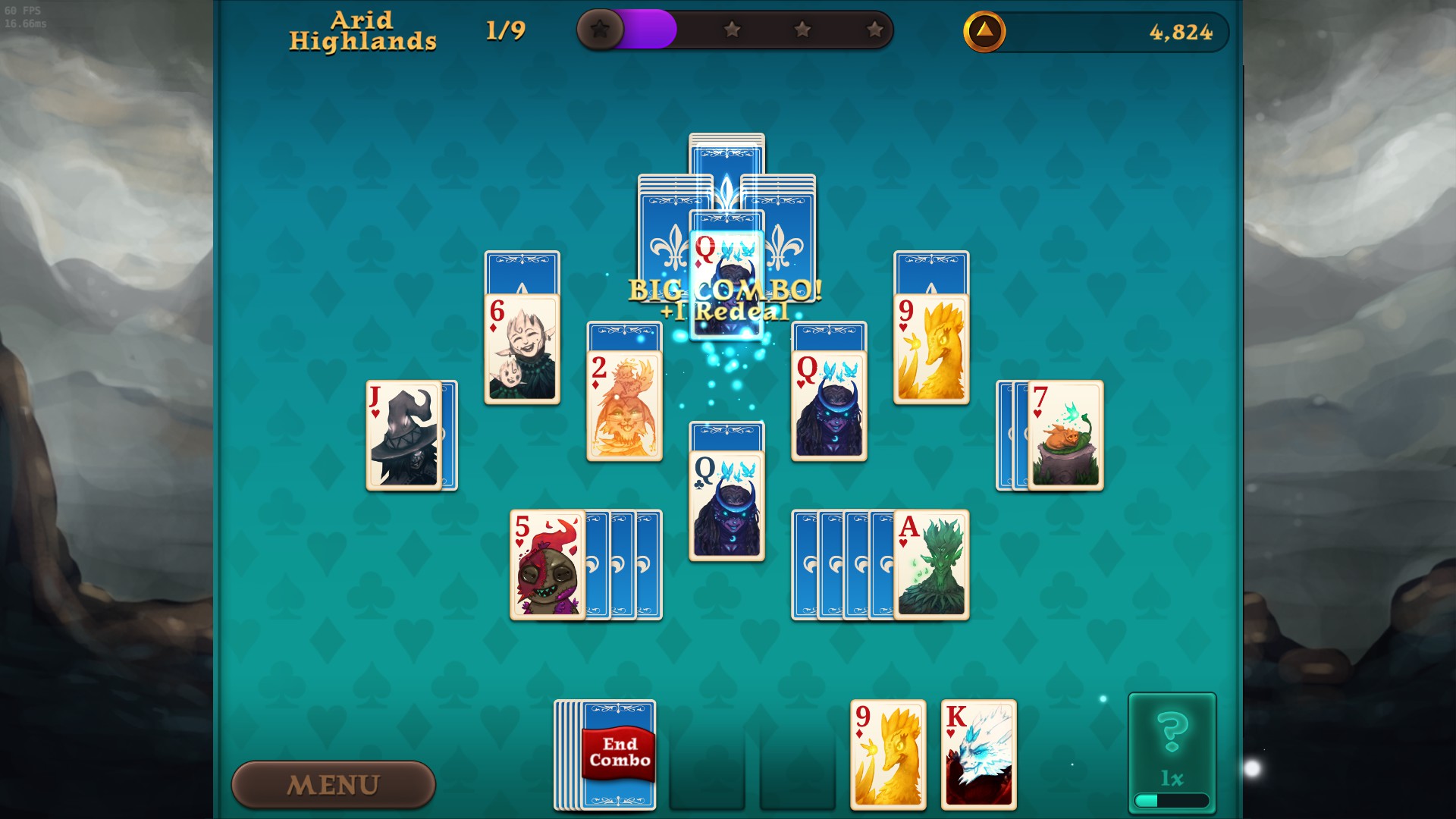 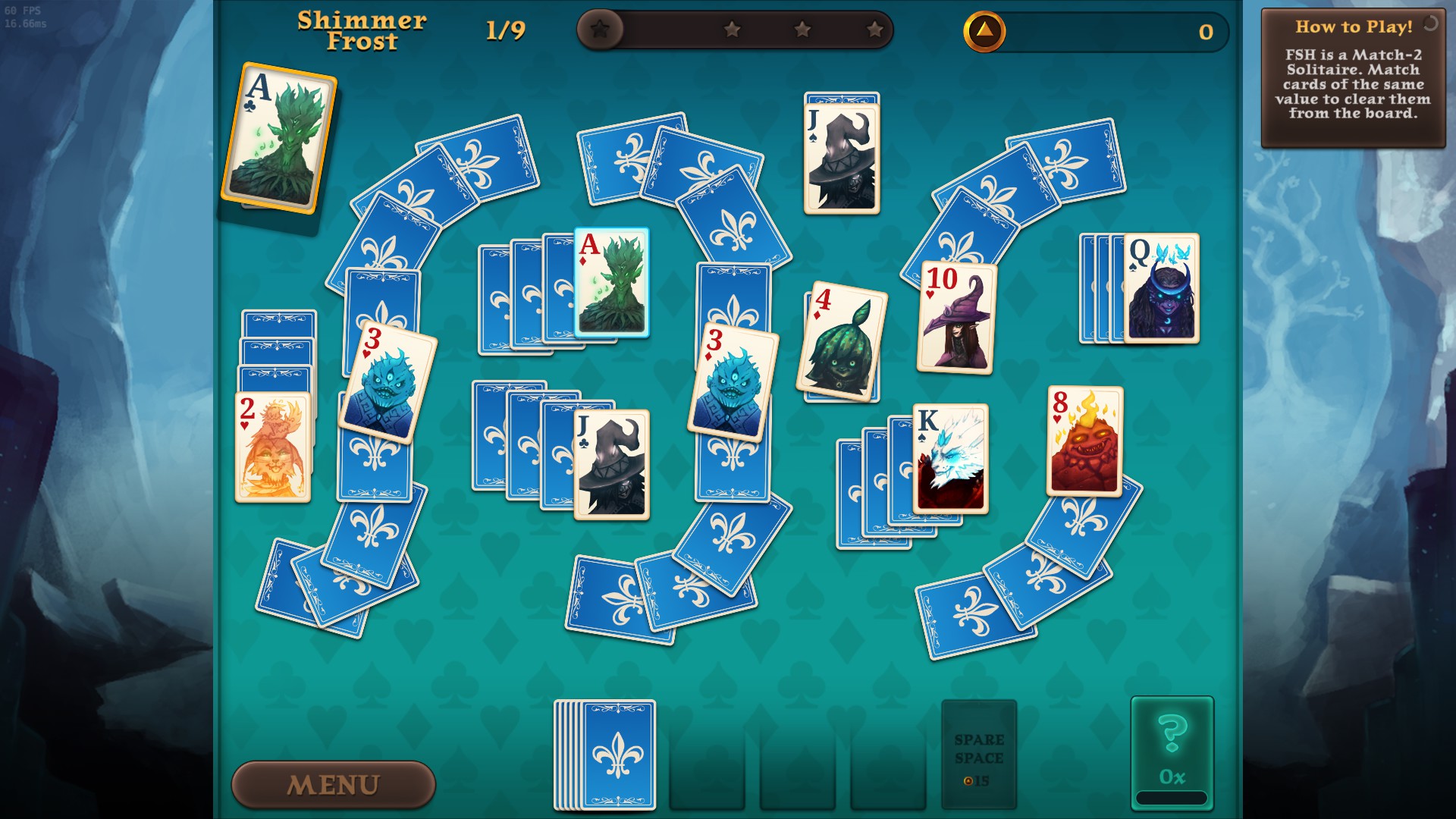 I have always hated this type of solitaire... Until now.  During the course of beta-testing, Faerie Solitaire Harvest has become the best, most-addictive solitaire game I've ever played... and I haven't even seen the story yet (they've withheld that for release day)!

Options include separate sliders for Music, Ambience and Effects, plus Full-screen/Windowed and Custom Cursor.  Under Game, you can even customize the colors of your suits!  For instance, I made mine Violet and Pink instead of Black and Red.

Also under options is a long list of Toggles that you can turn on/off, such as various notifications and popups.  Your profile link is located at the top of the title screen.

The first thing you're likely to notice is the music.  Ahhh, the music!

I absolutely adore the soundtrack - it adds such a compelling feeling of magic and wonder to the game.

This is a match-2 (mahjong-style) solitaire game, but unlike every other game of this type that I've played, there can be real strategy involved.  Sure, you CAN just mindlessly click on matches if you want to zone out, but there is so SO much more to FSH than that!

The in-game tutorial is excellent, but I'll give you an overview:

During Adventure Mode, you'll visit 40 locations - each of which has 9 hands - and free a trapped faerie at the end of the ninth level.

Match two cards of the same value until you remove all of the cards from the playing field.  You have a deck with three foundation spots, plus a "spare" space and the ability to earn wild cards.

Making matches earns you Pure Gold, and at the bottom of some piles you'll find resources, eggs, bags of gold and sometimes even potions!

The deck can be re-dealt once, but it will cost you 1,000 Pure Gold.  After that, you'll have to restart the hand (you do keep all rewards you've earned.)

But wait, there's more to it than that, and here's where the strategy comes in.  Combos!  When you match two like-cards of the same color, you'll start a combo.  Keep matching same-colored cards to get bonuses.  Suit doesn't matter, as long as the cards are both red or both black, your combo will continue until one of two things happens:

There are four reward tiers for combos, so go for the highest you can get!  As an added bonus, any combo of 7 or more will earn you a FREE redeal!

Another reason to go for combos is that it will fill up your Wild Card meter much faster than non-combo matches.  Each time it fills up, you'll earn another wild card.  You can have an unlimited amount of Wilds, but the meter will take longer to fill for each additional card.

Your spare space costs gold to use, and goes up in price each time you utilize on that level.

Once a location has been completed, you'll be able to go back to it at any time to do a 'Quickplay'.  Replaying a location via Quickplay costs 1,000 Pure Gold, but there are higher resource rewards, as well as a Loot Box to open at the end (instead of freeing a faerie).  Be careful, though!  If you fail a hand during Quickplay, you'll have to pay a new entry fee and start the location over from scratch!

You will not lose progress in Adventure Mode if you decide to Quickplay a location.

As you progress through the game, you'll find eggs, magic, stone and wood.  Make an egg active by selecting it in the Pets menu, and it will earn experience as you play.  Once it's reached full EXP, you'll be able to hatch it to see what's inside.

After your pet(s) has hatched, it will need to earn experience 'til it reaches the stage where it can evolve.  EXP is not enough, though, and that's where the resources come in!  Each pet requires a different amount of magic, stone, wood and gold in order to evolve.

As a side note, I never wanted to evolve my pets in Faerie Solitaire because they were so cute young, but a nice little BONUS that the devs added is that once you've evolved your pet, you can swap the picture back to what it looked like as a young'un by simply clicking on the pet's pic~!

There are 44 in-game and Steam achievements, and while they come easily at first, you're really going to have to work for some of the others!

Once you finish the 40 locations in Adventure Mode, you'll enter NG+.  I'll tell you right now that one of the achievements is to reach New Game+3, but don't let that scare you!  This game is so incredibly addictive that it was never a slog for me.  As a matter of fact, I just started NG+4 on my main profile a few days ago!

A great benefit of NG+ is that the drop rate increases, which will really help when trying to get all of those pets evolved!

Sometimes I want to try to clear every card on the playing field without drawing from the deck, other times I try to get the very highest combo possible, without thinking about how I'll pass the level.  Everyone will come up with their own style of playe, and whether you choose to play it loosely and just click on everything, or whether you want to do a self-imposed nightmare mode (no spares and no wilds) is up to you!

I had mixed feelings when I was asked to help test the game, but it didn't take long for Faerie Solitaire Harvest to win me over completely.  This is a magical, lovingly-polished gem of a game that I absolutely cannot stop playing.  My highest recommendation for this one, even if - like me - you think that you don't like match-2 solitaire games!
_________________
Never be a prisoner of your past.
It was just a lesson, not a life sentence.

Faerie Solitaire Harvest just had a huge UPDATE a couple of days ago.
You can see a few of the new features in this video:

The publisher (accidentally, I'm told) put the game on sale at 50% off at Steam, along with the rest of their catalogue! It's a fantastic game, so grab it while the price is nice and low!
https://store.steampowered.com/app/348910/Faerie_Solitaire_Harvest/
_________________
Never be a prisoner of your past.
It was just a lesson, not a life sentence.