Witchcraft: The Lotus Elixir
by Long Leaf's Friends - May, 2014

Dear Witch Apprentice, are you ready to meet your fate? Because an uncanny adventure is near! You possess the ability to work magic through cooking. This means you are the only person capable of making the magical Lotus Elixir. You must hurry and find all the ingredients needed to make this potion because only it can save your world! As you visit beautiful and mysterious locations, marvel at the artfully crafted scenes, and take in the atmospheric soundtracks, you'll find yourself fully immersed in this world hovering out of time. 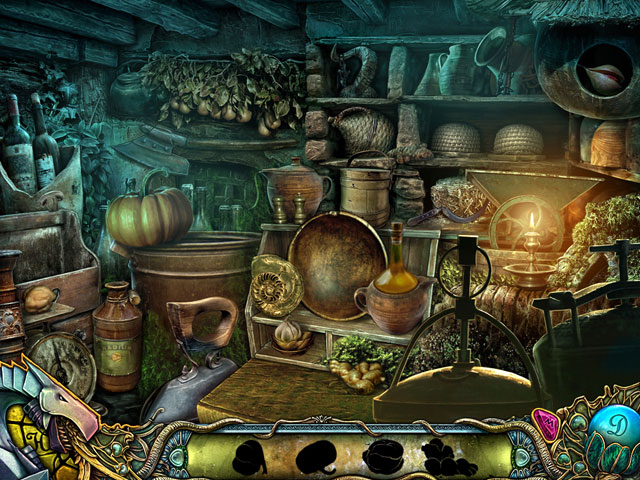 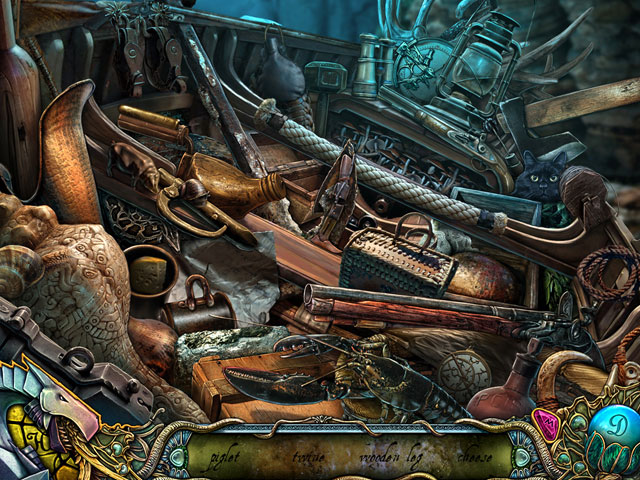 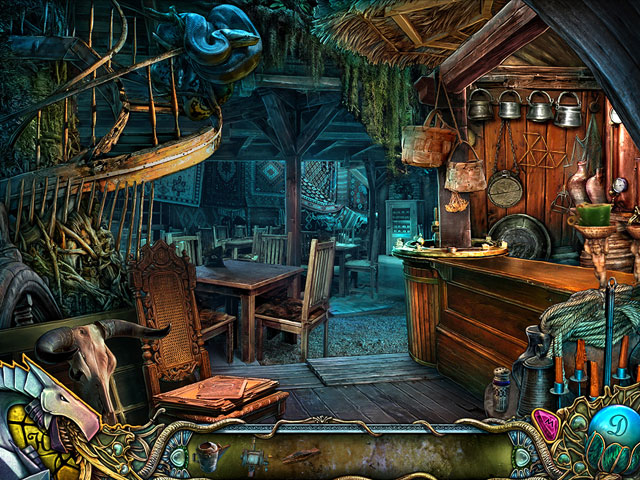 Gave this a quick once over. It failed to entice me at first - but I had only 6 minutes left when I bailed, so it kept my interest. And I know, given the most significant thing in this game is that it has little to no handholding, and is also creepy, that there will be at least a dozen people who will love it *wink*. The artwork is nice. Too dark and a bit gross, but very good style. Just a hint of that dark outlined style that totally changes the look of a game, such as they do in Mortlake Mansion. Weird sound effects. The music is a nice change. A single guitar, at one point.

The developer is just a couple of people, and they produced a great first (I think) effort. But it is a very low key introduction. Just a (well chosen) voice, a little too slow in delivery, telling us a little of the circumstances we find ourselves in. The story is that you are an apprentice witch, and today is your final exam. I think. The story was pretty much lost as you try to figure out what needs to be done. So I may well have forgotten things.

This is the kind of HOP game where a ring springs out from (in this case) a golden ball, and the items pictured must be found lying around in a location. As well as this kind of gameplay, there is the finding of recipes, collecting ingredients and following the instructions.

There appears to be little or no other gameplay, very few puzzles. But the puzzles are great. They take old ‘favourites’, like the ‘match the pairs’ and add interesting, slightly more difficult components. In this case, the “objects” are insects on the spines of very old books, where you must find the matching pairs to eliminate. The insects are not clearly apparent, and there can be more than one insect on a spine. In another, you complete a ‘mirror’ jigsaw, but don’t dally! The glue you must add for each piece will dry.

Which brings up an important point. Don’t try this game if you’re squeamish. There are spiders, snakes, insects and other creepy stuff everywhere. Another point in favour, dark and eerie fans! *wink*
There is a hint (on the left side, marked 'H') and a notebook with replayable video clips and copies of the recipes, marked 'D', on the right. And a small button top right of the inventory bar marked 'M', which takes you to the main menu - where 'Exit' is seriously hidden in the bottom left corner. The entire interface in this game felt wrong.

Hint and Skip take forever, and there are no choices of difficulty levels. Also, no map. Hint is not much help either, most often you get that old fashioned “There is nothing to do here”. Which is better than no hint at all, but only just. Eventually, if you go blindly clicking away forever, as I had to, on just the 2nd HOP (and I’m not usually THAT bad), a very faint hint of a sparkle will highlight the items you’re searching for. But it didn’t register on me, until I hit the last object left to find.

The entire game felt old fashioned, with its low level of adventure play and virtually no help, and the style of HOP. Which will also appeal to those who like the classics. I think I’d have to call it a iHOG, rather than a HOPA.

Personally, I felt a bit simple, playing this game, because everything, even the HOPs, makes you think. Not really my cup of tea for a stand alone. But if you like that style of play, the game certainly is of sufficient quality and a certain charm. And despite my preference for HOPA’s I will definitely be getting this game with a punch card credit.
pippi

I just finished the demo for this game.  What JustTheFacts said, but I'll condense it a bit.

1.  Game premise / story looks very interesting.
2.  Artwork is beautifully drawn.  Even the creepy crawlies are pretty.
3.  The "what exactly am I doing" part of this game is confusing as all get out.
4.  The puzzles and HO scenes are very clever.
5.  See #3.  The how to find / take / use / do stuff mechanism makes this game much more difficult than it should be.

That said, I'm bestowing it with a PCC an adding it to my collection.
RenaissanceMom

I didn't get further than the pics on the download page. I'll admit to being prejudiced, but I'm soooo tired of that done-to-death style of busy pseudo-gothic artwork, with its predictable blueish, reddish, goldish overlay of color. I was bored just looking at it.

Pretty sure it's a soft release at BF today.
JustTheFacts

RenaissanceMom wrote:I didn't get further than the pics on the download page. I'll admit to being prejudiced, but I'm soooo tired of that done-to-death style of busy pseudo-gothic artwork, with its predictable blueish, reddish, goldish overlay of color. I was bored just looking at it.

Hi Renaissance Mom, sorry the game didn't appeal to you. Listen to me, feeling guilty because you didn't like a game I was so-so about myself!

Seriously NOT boring is the fact that I have worked out to copy, in a usable state, your emoticon! YAY!!

Haha, don't feel bad Justie, cause I'm an idiot for sure.

It may very well be a fantastic game but silly me can't get past the still frames.
Sponsored content