Order Of The Light: The Deathly Artisan

Order Of The Light: The Deathly Artisan

Order Of The Light: The Deathly Artisan
by T1 Games - January, 2014 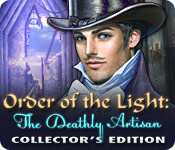 Rural Smalltown used to be peaceful, until a burst of paranormal activity turned everything upside-down. People are fleeing for their lives as paintings come to life and poltergeists destroy their property. As the newest initiate of the Order of the Light, it's your job to investigate the reason behind this chaos. You'll have to explore every inch of the town if you want to find the truth. The Order has outfitted you with their latest gadgets, including a ghost-catching device, but will that be enough to stop whoever is behind this? Find out in Order of the Light: The Deathly Artisan!

Re: Order Of The Light: The Deathly Artisan

FIRST IMPRESSIONS
I was put off a bit at first by the blurry graphics of the early part of the game. For a CE, I thought, this is not good enough. But either my eyes adjusted, or the graphics improved, because certainly for the rest of the demo (which took almost an hour on the easiest of 3 difficulty levels), the game looked fine.

The intro was engaging, though, and the promise of a story that included both living art and ghosts kept me from being too quick to judge. The story really does sound fun. A town is beset by strange occult phenomena, a group called the Order Of The Light has recruited you as a detective, and have sent you to Smalltown as your first assignment.

The phenomena do not fit neatly into one category – there are balls of fire, poltergeists, gravity-defying victims caught suspended in the air. All is confusion. Left to your own resources, you commence to explore the town, and find its inhabitants, who are none too obvious, except for a strange man who seems determined to block you at every turn. When you finally find the mayor, he is on fire, and your first task is to save his life.

SIGHTS & SOUNDS
The graphics, as I say, are initially pretty blah, but they improve. They are never spectacular, but they are certainly well done, and I like the animations and ghosts. The HOP scenes are clear, although fairly static and therefore a tad boring. The voiceovers range from okay to very good, there is some attempt at lip synch, which doesn’t really come off, but is not bad. The music ranges from great crashing sound to pleasant and unobtrusive, and the environmental sounds are very good. In all, the art is better than average, but not great.

GAMEPLAY
The game favours HOPs. There are quite a few in the demo. They are interactive lists, and are visited twice. There is nothing remarkable about them.

The puzzles are better, but fewer. Some are quite complex, others are straightforward enough, but need 3 rounds to complete. I skipped a couple, not because they were hard, but because they would take too long to complete for me to do in a demo. But they were interesting and I certainly would play them out in the full version.

The adventure aspects of the game are pretty simple, although there is a lot of toing and froing, many inventory items to be found and used, and a lot to remember. There is a interactive jump map that unfortunately only tells you which scenes are completed and which not. The hint, however, gives a precise instruction for the next step. It will be too helpful for some people’s taste – first time I used it, it told me the code to input as well as where I should do it! There is also a notebook which keeps a summary of events so far and shows your collectibles progress.

A special tool is used to find and eliminate the 35 ghosts that are scattered throughout the game. What I like about it is that the suspicious phenomena that suggest a ghost may be in the area are not always the same, so using this gadget does require attention to location, and judgement. I suspect this will be one set of collectibles that is also in the standard edition.

CE BLING!
This is one of those games that is as much about the Bling! as it is about the game itself. You will be kept very busy trying to find the 50 collectibles, which are 10 sets of 5 each, of which each instance is an individual. For example, one set is Fruit. There are 5 pieces of fruit to be found, but each is different – a pineapple, a pear, etc.

There are achievements (32), which are mixed story-based and performance based. There is also a statistics page. The game has a timer, points are issued for each collectible found, achievement  reached, etc. Things like the number of skips are listed. HOPs and puzzles also get up to 3 stars based on your performance. There is, in fact, a mind-blowing number of things to keep track of if that is your thing.As well, there are the more standard extras: bonus chapter, SG, Wallpapers (9) – good ones, showing the characters of the game in their settings, Concept Art, Music, and replayable Mini-Games.

COMBINED IMPACT
This game is only special, I think, because of all the extras. Without them, it is a fairly average game, certainly not bad by any means, but not inspiring either. Which means I’d recommend the CE in this case, over the SE, if you like a lot of activity in your game.