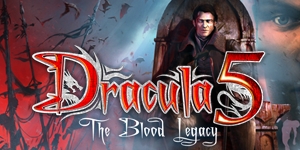 Is it just a painting or is it a living portrait? As Ellen Cross, art restorer for the Metropolitan Museum of Art in New York, continue to unravel the mysteries of the Vambrey collection in Dracula 5 – The Bloody Legacy, a chilling adventure game.

What is the Shadow of the Dragon and how does this mysterious order maintain its dominance over Count Dracula? Despite your failing health, you are driven to quest again to discover the truth and reveal the thief of a most intriguing Dracula portrait. Use your keen ability to spot clues and your abundant courage to face the threats along your journey to meet the Prince of Darkness.

*Dracula 3: Path of the Dragon has now been separated into three parts:

Did you play Dracula 4 The Shadow of the Dragon? I did. It was good, but rather
short. You really need to play that first. But get it on sale.....of course.

Also, Dracula 3: The Path of the Dragon is all in one part on GOG. I already own it on
BF, but it came as a package with D 1 & 2.
I got all three on sale for $2.99. So definitely wait.
RenaissanceMom

Keeping my eye on those GOG daily deals....
(What a rip - BFG is effectively charging $21 to members for Dracula 3!

Gamehouse has a promo (I recieved an e-mail) for 75% off 75DISCOUNT.

I bought this game for $2.70.
JustTheFacts

Thanks for the heads up luvtoread. I have the other 4 (have, not played yet of course), and was mulling the idea of getting this one, but, thought, i'll wait till a sale or something (which, with gamehouse can be a long time coming) and now this! Excellent! $2.50 for me also!
Sportygal2009

RenaissanceMom wrote:Keeping my eye on those GOG daily deals....
(What a rip - BFG is effectively charging $21 to members for Dracula 3!

Oh yeah and I must say their so called "reason" for splitting these games up and making them into several different parts saying making it easier for people to download. Well there might be a little truth to that BUT if they are honestly trying to "make things easier" then why charge $21 for the whole game when it was originally $6.99 for the whole game? Make it easier my snow white ass. That's more smoke they need to take and blow across someone else's computer screen.  I must say with all these recent changes I can honestly not believe that Paul Thelen has been so successful with his game company. Maybe there was a time when he cared about his members but now that Big Fish has been around for a few years and he's made his money = WHO CARES! Oh yes folks. Companies aren't about people they are about your wallet. They don't tend to listen too much until it starts having a huge effect on their wallet.

I don't play these type of games but I do recall the big fiasco in the forum over the Syberia game being split up into different parts and rightfully so making several different parts and charging 3 times as much just to get one piece of the game.
JustTheFacts

Didn't even know big fish had the drac games! I found the others on somewhere genki sent me when they were on sale - gog.com I think - and got the trilogy for like $2.99 or something crazy like that. Actually spent $ getting the 4th game - $5.99, I think! So now I have these mega games I'm too frightened to even open! But I am a true collector - some games you just gotta have!

sportygal--It wasen't BF that split up those games. I don't think they had a say in it,
I believe it was the developers themselves (I could be mistaken about the devs, but not about BF).
Other places where these games are sold are also selling them as Part 1, 2, 3.

luvtoread: OK! Thanks for explaining. Much appreciated.

I still don't let Big Fish off the hook though because they shouldn't advertise these as a "new" game and then have the gall to charge 3 times the price for the game when it was originally $6.99 for the whole game. Shame on the developer too.  Just like that Lost Civilization game that was released awhile back. It was a remake of another game Nibuiru. I definitely don't have a problem of remaking games but they really need to quit advertising the "new" game every day crap because it's not so. Also on the days where a SE version of a CE is released well that is not a "new" game for some people cause they bought the CE so they don't get a "new" game that day.
heleanthia

JustTheFacts wrote:Didn't even know big fish had the drac games! I found the others on somewhere genki sent me when they were on sale - gog.com I think - and got the trilogy for like $2.99 or something crazy like that. Actually spent $ getting the 4th game - $5.99, I think! So now I have these mega games I'm too frightened to even open! But I am a true collector - some games you just gotta have!

But Dracula 4 and 5 are both VERY good and not really scary; at least not as scary as the very long and excellent Dracula 3...

as others have said, they are pretty short(as they were one game, before)  I really enjoyed them...
genkicoll

The legacy of blood is yours to witness.

Dracula 4 + 5 , that is Shadow of the Dragon and newly released The Blood Legacy, a contemporary tale of mystery and terror delivered in the form of an intriguing and immersive point-and-click adventure game, is available 75% off on GOG.com. That's only $4.99 for the first three days! If you already own Dracula 4: Shadow of the Dragon on GOG.com, you receive the fifth game as a free update!

In the ominous reaches of the Carpathian mountains a ruthless voivod ruled from the height of his throne red with blood of his enemies. Whoever met him in battle would call him a demon, or a devil. His subjects had a different name for him, though, in their tongue. They called him Dracul, the Dragon. The legend has it, that this fierce warrior renounced God and become cursed to roam the Earth forever, restless, hungry for innocent blood, and doomed never to see the light of day again. But the curse came with power growing with every century of roaming the darkness. Thus, Dracul became the embodiment of evil and darkness itself, the one that fills our hearts with fear whenever the light goes out. The Vampire, the immortal enemy of man, that hunts in the night up to this day. So the legend says. There is at least a grain of truth to every legend.

Dracula 4 + 5 takes the vampiric lore into the modern setting. We follow Ellen Cross, a young art restorer, on her journey across Europe. In her way she's confronted with mysterious and terrifying events that will make her question everything us humans assume to know about the world. Secret societies, dark rituals, and powerful demons stand in her path. Finally, Ellen discovers new information about the Shadow of the Dragon--the mysterious brotherhood that the infamous Vlad Tepes might have been affiliated with. Thus begins the endgame of the centuries-long struggle between the light and dark. Will you dare to follow Ellen's blood-chilling story?

I vant... to suck... your blood.  Mwahahahahahaha.

Well shucks.  I wanted to link to a youtube video, but I can't find it!

It's a scene from The Monkees where Davy Jones is dressed up as a vampire saying, "Blah, blah, blah... I vant to suck your blood."