Dream Chronicles: The Book of Air
by KaTGames / Playfirst - June, 2010 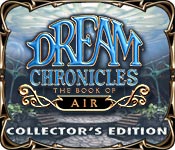 Help Lyra, Faye’s daughter, find the unique Clockmaker and escape from a strange dimension in Dream Chronicles: The Book of Air!

Dream Chronicles: The Book of Water
by KaTGames / Playfirst - April, 2011 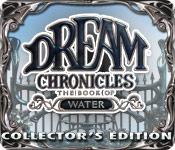 Lyra has found her way home… only to find her town hit by a devastating storm. In search of power, the evil fairy queen of Dreams has cast a terrible curse over all of Wish. With her father gravely ill and her mother missing, Lyra must find a way to break the spell. Journey through beautifully enchanted places, solve challenging puzzles, and seek answers to save Lyra’s hometown in Dream Chronicles: The Book of Water!

Lyra's Destiny was initially meant to be a trilogy, just as Faye's Journey spanned the first three games. Alas, the third game, Book of Fire, will never be made.

As PlayFirst had initially announced and The Book of Water's final scenes implied, there would be a sequel called Dream Chronicles: The Book of Fire to be released. But soon after The Book of Water was released, since July 2011, PlayFirst cancelled releasing casual games on PC/Mac platforms in order to focus on its growing mobile gaming market.[10] Because PlayFirst hold Dream Chronicles trademarks, KatGames must have their approval in order to develop a new sequel, thus KatGames had to move on with other projects. Due to that cancellation, The Book of Fire will not be developed and released, and The Book of Water was the last collaboration between PlayFirst and KatGames. Furthermore, due to that early cancellation, the game's development time was cut short to fit PlayFirst's game schedule. KatGames had to reuse several previous games' scenes, background music, and sound effects. The animation was not designed in 3D as KatGames did in previous games. Some puzzles were also cut short and lacked difficulty towards the end; and even the same voice-over was used for both Lyra and Faye; thus overall making The Book of Water felt unfinished and simplistic.

It's no wonder fans of the series have universally criticized these two Collector's Editions as NOT being worth the money. I beta tested Book of Air and enjoyed it, but I only got the Standard Edition because of the horrible reviews the CE got. I am playing the SE now, and should have a review for it some time in the next couple of days

There are separate sliders for music, voice, and sound (plus a mute button), and the game can be played full-screen (plays great on widescreen

) There are two difficulty modes to choose from, Casual and Challenge. In challenge mode the puzzles are more difficult and cannot be skipped. HINTS are refillable no matter which difficulty level you choose.

The intro that you see upon entering the game is a video montage of our previous journeys through the series, giving us a small reminder of what Faye went through in the first three games. Now we enter the town of Wish as Faye's daughter, Lyra, on the day before her 18th birthday.

I went with casual mode, since I was afraid of getting stuck on a puzzle and not being able to skip. As it is, there seems to be a whole lot of hand holding. I accidentally clicked too quickly and missed the instructions for a puzzle (and the TV was on, so I couldn't hear what Lyra was saying), but luckily the puzzle was easy enough to figure out

In addition to the regular adventure-gameplay, you must also find a plethora of tiny little dream pieces (150 of them, total, if I'm not mistaken.) It's not optional, as it was in previous games (? seems like it was optional, but it's been a LONG time since I played them), you MUST find them to unlock dream powers, which you'll need to progress in the game. On the plus side, the little darlin's will sparkle after a while... not something I generally want in my game(s), but since these things are hard to spot, I'm not minding so much~

Also, if you realize that you've missed some in a place you can't return to (such as on a puzzle that you've solved), don't panic -- new ones will spawn elsewhere for you.

In the end, we are clearly set up for a sequel, which of course is the Book of Water. It turns out that we are being scored on things such as the number of Dream pieces we found, how many times we used the Locate (hint) button, and the number of puzzles we skipped. We are then assigned a rank based upon our score.

There was one puzzle that I simply could not figure out towards the end of the game -- even after looking at the walkthrough -- so I'm glad that I chose to play in casual mode.

It has been so long since I played the original Dream Chronicles trilogy... I don't remember there being SO very much back and forth feedback (finding notes, the main character talking, etc.) Perhaps I have just outgrown this type of gameplay, I don't know! It's a good game, I just didn't enjoy it as much as I remember enjoying the original three.
_________________
Never be a prisoner of your past.
It was just a lesson, not a life sentence.