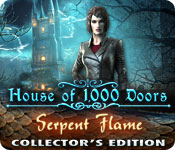 Return to the House of 1,000 Doors to save mankind from annihilation! Giant snakes have burst out of the Earth and are wreaking destruction across every continent. Your mission: travel back in time to four different epochs to gather the elements needed to activate a machine that can destroy the ancient beasts!

The Threat Is Global, Are We Ready To Face It?

Each new 1000 Doors game increases the scope of our activities, and now we are ready to SAVE THE WORLD - with the HELP of at least one ALIEN and a little TIME TRAVEL.

There are GIANT SERPENTS attacking all over the world, and the inhabitants of the House are the only ones who are safe. You were rescued by a stranger and brought to the House, where he immediately collapsed unconscious. It will be interesting to uncover his story!

The GAME STRUCTURE and mechanics are the SAME as the previous 1000 Doors games. You must resolve dilemmas in four different realms. In this case, four different eras in time. The first is Central America in the time of the CONQUISTADORS, where you'll meet another very interesting character.

Young Sammy from the first game uses his genius for things mechanical to furnish you with the special keys needed for the time portal. And Gabriel is also with us, being his usual helpful self, reading in the garden – in the rain.

The graphics are excellent, but I’m not going to rave about them, because they are no more than we’ve come to expect from any decent game, particularly a CE. INTRO and CUT SCENES are GOOD, not great. The AMBIENT sounds are very good, MUSIC forgettable. VOICEOVERS for the most part are WELL DONE.

The PUZZLES so far have been reasonably straightforward. I skipped one because I got frustrated with it. Used the SG once, when the INTERACTIVE JUMP MAP wasn’t enough for me to understand what to do next, and HINT refers you to the MAP, unless there’s something to do in the current scene.
One thing I gotta say, I am sick of FLOATING ISLANDS!

This is a nice solid game. Bound to entertain anyone who plays it, it is not necessarily going to rock the world.

Also 20 MINI-GAMES to replay, and 4 PUZZLES. (What is the difference anyway? I never know)

I LOVE the story so far and am a FAN of the SERIES, but I’ll wait for the SE.