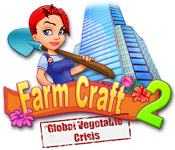 Ginger’s company, aptly called the Tomato Corporation, owns
and works with a vast network of farms and food suppliers making
quality, healthy food. Her trusty shovel hangs on the wall as a memento
to her great work in past. During a trip back to her farm to visit to
her grandparents, Ginger stumbles upon people making suspicious, and
dangerous, experimental fruits and vegetables in her village. Dive into Farm Craft 2: Global Vegetable Crisis and save the world in this Time Management game.

Let me preface my review by saying that I don't generally enjoy Time Management games. I tried this game because I've been trying to branch out into other genres a bit, and because it was a new release not too long ago. I've tried a few TM's, but none that I've enjoyed as much as this one (sun)

There is a lot of story with this game. You can of course skip it, but I enjoy a game that has a good story. The game is narrated with good voice actors, and you can click through it at your pace, or skip it entirely, depending on what you prefer.

Graphics for the game time are very good, gameplay is enjoyable and intuitive with enough tutorial to get you on your way, but not so much that you get irritated with the game.

The only thing that threw me off (and simply because I hadn't seen anything like it in any other TM) is that the screens scroll using either the mouse or the arrow buttons. You have a LOT of room to work with, and I love that :D It makes things a bit more challenging since you have to look around, and I consider that a good thing with this game.

Not too "clicky", as some of the Farm games I've tried have been. You can hire workers to help you out, therefore you don't get overwhelmed with too many things to do at once.

*SPOILER about something mentioned earlier*

Spoiler:
I was a bit surprised when I came upon the nighttime stealing, but it's supposed to be an investigation into possibly illegal and immoral practices. I guess it would have been more obvious that this was the developer's point if they could have played the Mission: Impossible music in the background.

Overall, I enjoyed it, and will spend a credit on it within the week~