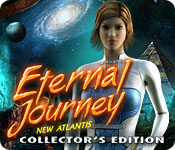 Travel from the deepest trenches of the Atlantic Ocean to the awe-inspiring wonders of Mars as you solve the greatest archeological puzzle known to man: the origin of Atlantis. Through stunning production values and cunningly designed puzzles, Eternal Journey: New Atlantis will draw you into an experience unlike any other hidden object adventure.

FIRST IMPRESSIONS
This isn’t one of those games where science and magic get all kinda jumbled up together. This is a classic science fiction story, with suitably space age locations and objects, music and mini-games. I love the initial few seconds, out in space among the planets.

SIGHTS & SOUNDS
The graphics aren’t wonderful, they’re a little on the blurry side, and of the less popular realism style, but they are up to the task of depicting the underwater excavation site of Atlantis, and all that follows. The cut scenes are excellent, playing the entire intro as if it were a movie. The voiceover of our heroine/narrator is perfect. It is only in the intro that it is used, for reasons consistent with the story. The background sounds are very space age, and the music is electronic and contemporary. In other words, as annoying as heck half the time ( *grin* Sorry, kids! *grin*), but exciting and very atmospheric.

WHAT’S HAPPENING?
As an archaeologist and linguist, we are working with our fiancé, an underwater builder, at the site of an Atlantean temple deep below the surface. You are determined to find an ancient artifact, Bellona’s Locket. Getting inside the temple is not as difficult as expected, but as you reach out to grasp the locket, the temple itself begins to collapse, you and everyone else in the dome are drowned. I’ll let you find out for yourself how you end up on Mars!

GAMEPLAY
A kind of old-fashioned HOPA in structure. There are a lot of puzzles, mini-games and HOPs, but there is also a lot of adventure style action, finding and using a myriad of inventory items throughout an enormous gamescape. The HOPs are standard interactive word lists. Each is visited twice, once in the course of the story, and again near the end.

I found the puzzles particularly easy, which suited me, because there are plenty of them, and I would have been bogged down if they were too difficult. Which doesn’t mean they are boring. Most are quite fun. The interactive jump map is essential for travelling around the very large and confusing game area. There is also directional hint, and a journal with tasks and there are 2 difficulty levels. There are no special gadgets, but there are 12 digital memory cards to collect. I got 3 of them. They are definitely not easy to find.

The options menu has a selection of resolutions to choose from, as well as full screen, wide screen, etc.

COMBINED IMPACT
Took me a while to get into it. Quite a while, really. But it is a longish game, so for the bulk of it I was riveted. The story is complex and involving – and original! - and the atmosphere is decidedly creepy. The ending is very satisfying, one of those games where you sit back when you finished, and have to wait a while before returning to the world.