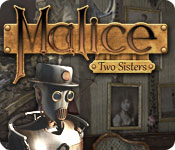 Help Victoria search for her missing sister, Emily, in Malice: Two Sisters. Emily's was last spotted at Urami Island, the boarding school that both sisters attended many years ago. The island is abandoned these days and people whisper that it is cursed as well. Explore deserted ruins, discover the shocking history of Urami Island and save Emily in this gripping Hidden Object Puzzle Adventure!

FIRST IMPRESSIONS
The low key intro, with its sepia tones and (antique) film grade visuals, set the mood for this game – ominous but also drab. No voices. The story is bare-bones and sketchy. The puzzles and mini-games are ordinary. Same goes for the HOPs. The game just dragged.

SIGHTS & SOUNDS
The quality of the graphics is not all that high, the definition is low, grainy and almost monochromatic – just varying shades of brown and grey. Widescreen stretches the graphics to a noticeable effect, as well as washing them out. The HOP scenes show more colour, but no animation and very little interaction.

The special effects and background sounds are very good, and the music varied well.

WHAT’S HAPPENING
The story is fairly mystifying for most of the game. We know that we must return to the island we spent some dreadful part of our childhood in, in answer to our sister’s distress call. The rest comes in dribs and drabs. Why we left, what was so horrible, what is your sister doing back here, and who is that creepy person who is making us feel so unwelcome? The questions are never completely cleared up.

MAKING PROGRESS
As with everything else in this game, the gameplay is dreary. We wander around room to lifeless room, trying to find our sister, coming across unbelievable numbers of locked doors. We are often required to take individual inventory items from one end of the island to the other, with a map that covers only the major landmarks (nothing inside of the many-roomed school). It does not reveal any active areas and can’t be used as a jump point. Expect a lot of toing and froing.

The HOPs are straightforward, sometimes a little difficult due to the darkness and graininess of the scenes. The game offers a sliding toggle for brightness, but it could have used one for contrast too! And aspect ratio. In fact, the game would probably have been a good game with just those changes.

Puzzles are mostly well known, and again, are unimaginatively incorporated into the story. But every game has its redeeming feature and this one is its hint function. It is our companion, a steam punk robot, and he really gives a hint – not the next step, just a mere suggestion in the right direction, such as, “Look again in the master bedroom”.

FAMOUS LAST WORDS
This is not a truly bad game, there are many worse ones out there. But it is below average on all counts, and although some may like it, and I did manage to complete it, I can’t recommend it.