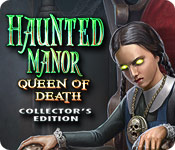 Dive into Haunted Manor: Queen of Death and save your sister before it’s too late! Find a powerful amulet to stop an ancient evil in this  amazing Hidden Object Puzzle Adventure game. After receiving a mysterious letter, you return
home to find that your family has been murdered. The only survivor is your sister, Stella, who now needs you to save her! Concoct a powerful elixir to save Stella and then confront  the Queen of Death!

Re: Haunted Manor 2: Queen of Death

In A Word, Dull

Off we go to rescue our twin sister again, who of course lives in the spooky family mansion. Our parents have been killed, murdered, or have they? The opening cutscenes for this game are a bit long-winded, but the VOICEOVER is good, and it is a good introduction to the STORY, which only unfolds as we progress through the game.

Although it involves the twin sisters from the original Haunted Manor game, it is not a sequel.

The VISUALS are clear and light, but difficult to describe. The GRAPHICS seem as though they’ve been painted in OIL, with a thick brush. There is a definite TEXTURE to them, and they are quite interesting. But they are far TOO MONOCHROMATIC for my taste, I never knew there were so many different shades of brown and grey! Oh, and NO WIDESCREEN option, so the images were noticeably stretched.

The MUSIC, as with the first game, is DISTINCTIVE. Choir-like VOICES, REQUIEM-style tracks. Very WELL DONE, but it overshadowed any AMBIENT sound there may have been.

The game is MOSTLY ADVENTURE with a lot of HOS, in the form of INTERACTIVE LISTS. Items are generally clearly visible and the scenes are not too cluttered. Each scene is visited TWICE. In the final moments of the game, they are all revisited again, in a kind of TOUR OF THE GAME, to wrap everything up. Normally I quite like this, but there are 12 HOS to visit, one after the other, and it IS the third time.

PUZZLES are FEW and generally NOT TOO DIFFICULT, but some are DECEPTIVELY SIMPLE, and I, at least, had to skip. SKIP is QUICK. HINT is Very. Very. Slow. It is DIRECTIONAL outside HOS, except near the end of the game, where it reverts to “look elsewhere” comments.

The ADVENTURE component ANNOYED me. I was forever TOING & FROING, NO MAP, and often at a loss as to what to do next. There was just so much ground to cover, it was impossible to keep track of where everything was, so too much time was spent looking for the “lock that needed that key”.

Playing this game dragged a bit. I needed to get help too often, and the monotony of colour didn’t help. Not a favourite, not even an also-ran, but it is okay, I guess.