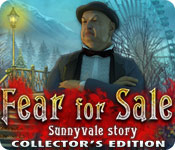 Take on another incredible mystery in Fear for Sale: Sunnyvale! Investigate a strange murder and get to the bottom of a complicated case. After making it to the scene of the crime, a deputy is kidnapped by a terrifying ghost house that appears out of nowhere!  Discover the connection between the latest murder, and another killing that occured many years ago. Put your detective skills to use and appease the ghosts in Fear For Sale: Sunnyvale!

Re: Fear For Sale 2: Sunnyvale Story

Weird, Not As Good As Expected, But Solid

Headline says it all. The standard story soon gets weird, with little explanation of things that are essential to plot. Like why and how the house came to be kidnapping people in the first place. And just what sort of evidence rules do they have in Sunnyvale? Major leaps in logic make the game confusing, which it otherwise wouldn't be...

Because the gameplay is straightforward and vintage Fear For Sale, the HO scenes are really interactive and clear, the puzzles are fun, and the artwork, while not as good as I anticipated, is still above average and worked well on wide screen.

Things I particularly liked were the multiple uses of inventory items before you lose them. Also, if you have to fuel up something, you don't have to traipse around half a dozen places getting a funnel, a hose, a gas can, the fuel, etc. A simple HO scene and you collect a full can with a pouring nozzle.

The disjointed story is mirrored by music that clearly had not been intended to produce an appropriate atmosphere. Sometimes it was actually quite cheerful, not spooky at all. I actually got a kick out of it, it made me smile each time it chimed in with just the wrong kind of theme.

McInroy Manor was quirky and so is this one - and a good game without setting the world on fire.