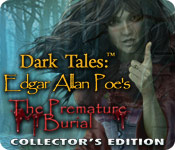 Step into Dark Tales: Edgar Allan Poe’s The Premature Burial ,  where Julien has hired the world famous Detective Dupin to investigate  the sudden death of his beloved Victorine. After her passing,  Victorine’s husband, who she has no love for, has her buried incredibly  quickly, making Julien uneasy. Become Detective Dupin’s assistant and  use your Hidden Object Puzzle Adventure talents to unravel the mystery!

Almost As Good As The Rest

The third in the Dark Tales series, this game, while I love it, is my least favourite. It has all the really good stuff that you’d expect from this series, and a few unexpected, but it is somewhat frustrating to play.

The movie-like, exciting and intriguing opening scene lets you know straight away that again we’re take a leap forward in terms of gameplay. So, of course, we have been promoted to M. Dupin’s associate, as he introduces us in his beautiful new lip synced voice. With the title comes a considerable increase in the amount of time and effort it will take to solve this mystery.

This macabre story is quite a bit more complex than the previous ones and so takes quite a bit more in the telling. Still, you must venture out on your own with no map or hint button. The puzzles continue to be easy, relatively speaking, but only sketchily described. Likewise, making your next move is pretty well left up to you for most of the game. Somehow I always manage to overlook some small but crucial item and end up having to reach for the walkthrough. I find this game less intuitive than the others.

Another innovation, collectibles, has us keeping one eye open for roses along the way. Tip: It’s worth your while to find them all.

Little nagging things are wrong with “Premature Burial”. Weird names for the objects on the list. Using a knife to cut a rope that “will be useful later”, but which does not end up in inventory. A sudden change in the black bar hints to full on hand-holding three quarters into the game. And a couple of weird little side quests. They all make for a more confusing game than the others in the Dark Tales series.

But I still think it is an excellent game, and would recommend it to anyone who enjoys a good story told in game play.