Available at:
Big Fish for PC and Mac
Iwin 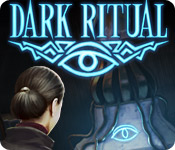 Step into the shoes of a detective who has been approached by the FBI to take over a terrifying case and stop a Dark Ritual! Explore Dr. Seymour Brown’s spooky mansion and see what the crazed scientist has been experimenting with! Track down your missing sister and help Agent Johnson stop the insanity that has taken over Blackwood Mansion in this intriguing Hidden Object Puzzle Adventure game.

There are no bloody sacrifices in this game, so rest assured about that... and if you were hoping for that, you've got the wrong game!

Options include separate sliders for sound and music, plus hardware cursor, full screen, and wide screen.

The "Play more" button on the main screen will show you a couple of other games made by Vogat Interactive, and the Strategy Guide button will take you to a purchase page if you'd like to buy one.

You start off with two difficulty settings: Casual and Advanced. I chose advanced since it means fewer sparkles

Actually, by fewer sparkles, I mean NONE, save for the indication of a hidden object scene.

There are no voice overs during the cut scenes, and no visible skip, but if you click anywhere on the scene, you'll see an option both to skip and to speed it up.

The music is sufficiently creepy, but not terribly dark.

The HINT button is refillable, and how long it takes depends on your difficulty setting. If used during the adventure portion, it will use up your hint and tell you something like, "Maybe I missed something near (whatever it is)" There is a misclick penalty during HOG scenes, telling us it's probably better to take our time

Speaking of HOG scenes, they are just about as "junk pile" as they come. Terribly crowded with an incredible amount of items, yet no tiny or strangely huge items, nothing obscured by shadows, and nothing weirdly-placed (like rolling pins in the sky). Just messy

Playing in advanced mode offers no unsolicited hints at all, and therefore the game is playing like an adventure-lite with some HOG scenes. I'm all for that! The Diary contains expanded story, and likewise, no hints. You will find items to use both during the adventure portion, and via the HOG scenes.

You can leave hidden object scenes and return later if you wish.

Something different that I discovered as I played is that the hint button charges separately for the adventure portions and the hidden object scenes. If you've just used up a HOG hint, then move back to adventure-play, your hint button will be full again (assuming that it was full when you started the HOG scene, of course.)

As I was moving through the game, I was thinking that it really wasn't all that dark and eerie, as I had been expecting it to be. I took a closer look at the graphics, and thought that perhaps it was because everything looked so "normal" (except for the messy HOG scenes), and then... Everything changed in an instant. No longer was I gliding through the game, not really paying attention. Now I was becoming immersed in the way I had hoped to be from the beginning, and things had definitely gotten creepy!

There is quite a bit of extra story to be found in notes and files throughout the game. Great for me, since I love story in my game, and if you don't care for story - well, don't read those things! They're not necessary to complete the game

I've now finished the game, and a pleasantly surprised by how good it was! It has nice graphics, good storyline, and fun gameplay. Based upon the first hour of play, I would have put this game on my "to buy someday" list. Thankfully, I bought it blindly based on friends' recommendations, and I'm so glad I did! This ended up being a very enjoyable game, and one that I will replay someday

I don't even remember seeing this one, will definitely try it out. scenes shots look good.
JustTheFacts

HOs All The Way

How time changes us. This game used to be one of my favourites, but replaying it now, it feels dated and HO heavy.

The story is the usual save the family member from the crazy scientist stuff, with a couple of amusing twists. I have no problem with that, it’s a good story that covers plenty of variation.

The graphics and the game play are the problem.

First of all, the graphics aren’t bad. They’re a little rough around the edges, literally, and occasionally that’s bad enough to make a HO invisible. The game's fairly low definition stuff, and there’s no attempt at anything that could be called ‘art’.

Then there’s the design of the HOs themselves. No effort has been made to give the appearance of relevance to the scenes, or drama or colour. Result: somewhat grungy overly cluttered junk piles with medieval weapons and NASA photos in the same cupboard.

The gameplay was very straightforward. 90% of it was HOs. That’s okay for some, and used to be for me, but for experienced gamers it’s not good news at all. There are dozens of them and each is visited twice. They are slightly interactive.

Barely remember the mini-games, even I found them easy.

One thing I really loved though was the music. Very ominous and science fiction, and only around some of the time so you don't get sick of it.

Do I recommend this game? For the HO fans, certainly. For someone dipping their toes into the HOPA, yes. To anyone else, no, this game is B Grade at best.
Sponsored content