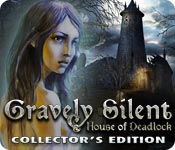 Save your sister from the grave! After receiving a troubling phone call from your brother-in-law, you’re off on an adventure! Investigate the troubling scene and discover the truth in Gravely Silent: House of Deadlock. Scour gorgeous Hidden Object scenes for valuable clues and unravel the mystery behind your sister’s disappearance.

Here is a gem of a game that I can never remember the name of - I have to look it up every time!

First off, the basics. There are two modes of gameplay: Casual and Challenge. I chose Challenge since I dislike unsolicited hints. You do still get some sparklies for items you need to notice, but not all of them, so you can't afford to get complacent and think you've found everything simply because there are no sparkles.

There are separate sliders for music, sound effects, and environment, plus options for wide/full screen and custom cursor. Tutorial is optional, as well. The music, etc, is very environmental and well-suited to the game

OH! There's a hidden object scene there!" You see, in challenge mode, you don't always get an indication that there's a HOG scene to do. Either I'd happen to mouse-over the area and see a magnifying glass, or check the task list to see that I'd missed a HOG scene.

The game is fairly straightforward, with a certain (varying) number of scenes that you interact with before moving on to a new area. However, EVERY location remains open to you throughout the game

There aren't a ton of things that you will have to remember from earlier parts of the game, but there are a few to come back to. Happy news for those who hate to-ing and fro-ing, the devs came up with an original, incredibly useful, and much appreciated way to quickly return to an area we need frequent access to - beautifully done, devs!

Despite the limited areas we are working in at any given time, it doesn't really feel like we're being limited because there is just so much to see and do! The graphics are beautifully done, the tasks are varied, and the mini-puzzles are great.

There are no instructions for the minis unless you use a hint, and they are skippable, if you wish. Some of them are your usual mini-game fare, and then there are the delightful puzzles that are reminiscent of those in Drawn. I had SUCH a good time trying to figure out what was needed on these puzzles

All of the puzzles are do-able without having to frustrating amounts of time on them.

I do have one gripe with this game, and that is the HOG scenes. I had a LOT of trouble finding the hidden objects, and had trouble deciphering why for a while... The scenes are nice and bright, no Grecian urns floating in the sky... There certainly were a TON of items squeezed in the scenes, but still, that wasn't it... Finally I realized that while there are no absurdly over-sized items on the screen, there were items that were not in proportion with the rest of the scene. Tiny items baaaad

I have two WARNINGS for this game.

The first is for the animal lovers out there. We have a couple of circle-of-life moments in the game that you might have a problem with:

Spoiler:
The first time is early on when we have to find and feed worms to hungry fledglings

If that one bothered you, then just skip this second spoiler:

Spoiler:
Later in the game, we have to catch and feed live mice to hungry adult birds

The second warning is for arachnophobes, as we have some scenes with spiders ranging from tiny to incredibly huge. This spoiler might help a bit, if you're uncertain:

Spoiler:
The spiders are pets of the groundskeeper, à la Hagrid and Aragog in the Harry Potter series. For those unacquainted with the world of Harry Potter; spiders that won't harm humans

Overall, despite my one gripe, I really enjoyed this game and will play it again, some day

Much More Than It Seems

I own another game (Bluebeard’s Castle) with an almost identical story – sister marries charming husband who fails to mention his previous wives, and then she dies/disappears under mysterious circumstances. In both games, to save your sister you must set the spirits of his previous wives/victims free. They are both good stories, but the similarity ends there.

This game is a simple and straightforward HO ADVENTURE. The PUZZLES are FAMILIAR & FEW. I skipped a couple, but only one struck me as actually difficult. Likewise, the story moves the ADVENTURE along SIMPLE LOGICAL lines, rarely detouring from the obvious.

The HO games are INTERESTING & VARIED. There are mildly INTERACTIVE LISTS, MULTIPLES & FIND PAIRS. Sometimes in combination. You will redo some of those HO SCENES a second time using a different type of search.

The game is NOT overly LONG. There is NO MAP, NO real HELP from HINT, NO JOURNAL. And of course, in a game this simple, NO COLLECTIBLES OR ACHIEVEMENTS.

What turns this game into an unexpected LITTLE GEM is the ARTWORK. Using colour, symbolism and humour, the artists create a SURREAL NETHERWORLD in which each of the wives is trapped until you free her. They are a DELIGHT to the MIND as well as the EYE, even though not the best GRAPHICS I’ve seen. As well, the MUSIC is wonderful, and worthy of an ear, just for itself.

I won’t pretend that this game is the best I’ve played – it’s not. But it is RELAXING, ENTERTAINING, and just DIFFERENT enough to make it INTERESTING.