Explore the Pacific as an underwater photographer and discover the mysteries of a sunken ancient city. Unwind in the depths of the ocean and submerge yourself in the atmospheric world and music.

Originally published in 2012, Reef Shot finally arrives on Steam after getting upvoted on Greenlight. Thanks for all the votes! 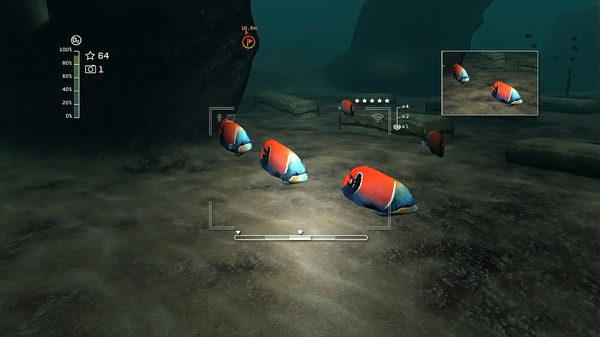 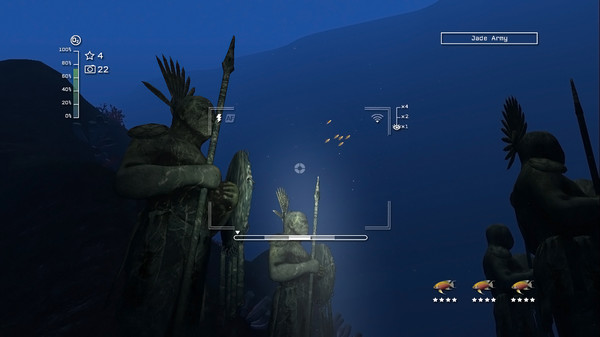 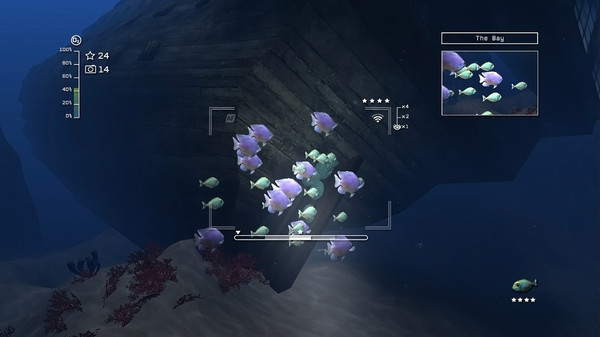 Options include separate sliders for Music, SFX and Voice, Resolution, Language and Controller Sensitivity (if applicable).  Partial controller support - only responds when you are on your dives.  Save Photos is OFF by default, but I can't find where those photos might be stored, so it didn't really matter.  No saving during chapters.  You'll have to complete the chapter you're on to save your progress.

This is a flawed title, which I enjoyed to a point.

There is a short tutorial telling you the basics of the game, and a lot of hand-holding.  This isn't an exploration game where you can take your time and look at everything, as you have defined tasks that have to be completed before you run out of air.  You CAN get more air, but you'll have to "buy" it, and if your don't have enough stars to purchase it (I'll come back to this,) it's level-over and you'll have to restart that section from the beginning.

On your dives you will be tasked with taking photographs of different kinds of sea life, as well as artifacts that you come across along the way.  You can see the items/fish that you need to take pics of at the bottom right of the screen.  Later on you'll see some stars under each pic representing the photo quality required in order to pass the task.

Movement is slow, but you CAN swim more quickly by holding down a button.  I'm not sure which button for the keyboard, but on the controller, you have to push down on the directional stick - a bit unwieldy with the other things you have to do, but at least the option is there!

The story is thready and unrealistic, but good enough that I wanted to keep playing.

How to earn stars:

Stars are earned by taking photographs.  The better the quality of your photos, the more stars you'll earn.  To get the best quality photos on fish, the motion-sensor has to be at three bars, AND it has to be in focus.  This isn't that bad in the beginning, but as you get better-quality cameras, it becomes increasingly difficult.  At my last upgrade, there was a swiftly-changing focus meter that I had to monitor, along with the motion sensor and moving with the fish, and in the end, it became well-nigh impossible for me to complete the shots with high enough quality for the game to accept them, and then there's the problem of running out of film...

For the archeological finds (still pictures), there is no motion sensor to tell you the quality of your shots.  Even worse was the chapter where I had to take 3-star quality pics of something, but there were at least twelve of those things present, and no indication of which ones I should be taking the pics of!

Spoiler:
They were gravestones

It only got worse from there, as sometimes the shots don't count unless you take them at the right angle.

There are quite a few things that you can spend your stars on that will make the game easier, but you have to EARN them first.

What would make the game better:

Achievements:
There are 17 Achievements, but you MUST complete the bonus tasks in order to get them all.

I will give this game a passing grade because I enjoyed what I was able to play of it, but my frustration with the latter levels definitely colors my overall feelings about the game.  If the devs address the issues with the game, I will happily give it a stronger recommendation, but for now, it's a "proceed with caution."
_________________
Never be a prisoner of your past.
It was just a lesson, not a life sentence.