Available from:
Big Fish for PC and Mac 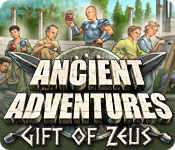 Go on an Ancient Adventure to Greece and find the fantastic Gift of Zeus
in this fun and exciting Hidden Object game! Join our heroine as she
tries to learn the secrets of the Athens’ catacombs and collect the
precious pearls that are needed to protect the gods! Explore gorgeous
levels, and go on a one-of-a-kind journey in Ancient Adventures – Gift
of Zeus today!

This is what I would call an "IHOG-lite". What I mean by that is that
there is interaction, but there is no "adventure" aspect to the
gameplay. When you finish a hidden object scene, you are automatically
moved to the next scene to search. You will use all of your inventory
items on the scene you found them in. To access the inventory, click on
the satchel on the bottom right. To go back to the list of items to
find, click on the satchel again.

There is a mini-game to find all of the purple gems you can on the
scenes. There seem to be two per scene Collecting these gems get you
"jewelry", which will aid you in your quest. Things such as faster hint
refills, etc. The mini-games are varied and easy to understand - or at
least the ones early in the game are

The graphics are cartooney, but well done. The music is quite nice, they
did a good job on it. The feeling is more medieval than ancient Greece
to me, but very nice all the same Hints are refillable, and the
interaction intuitive.

Overall, a nice cheery IHOG that's a little different than the usual fare.

You know, this game is STILL sitting on my computer... I never have finished it! I play a few scenes here and there when I need something light to play, then move off again to some other game. It's pretty much the same thing over and over, though the interactions are different every time. Surely I'm getting close to the end, now... :P
JustTheFacts

It sat on my desktop for months as well genki, and it was only this quest I'm on to play all my games alphabetically that I played it. And it is not bad for a HOG, I have certainly played worse.

Light-Hearted Departure From The Norm

Okay, yeah, sure, the game was probably designed for kids. So, when has that ever stopped us? And anyway, I’m not too sure about that, because it sure tested my knowledge of ANCIENT GREEK LEGENDS. Starting with the STORY. Thetis has lost her magic necklace and you must help Maia and Hermes search for it, otherwise the thief who stole it can open up the keys to Hell. (See what I mean? Thank goodness there’s an ENCYCLOPAEDIA).

This is a MAP DRIVEN HO GAME, with some SIMPLE (not always easy) PUZZLES thrown in. Basically, the game is broken up into chapters that  determine where you will go next, inventory items are used within the chapter, and you receive a running commentary from Maia on why you are doing what. There is NO real ADVENTURE component.

There are COLLECTIBLES that give you POWERUPS, such as faster HINT recharge. (Hint’s only useful in the HOS). As well, you can earn new ENCYCLOPAEDIA entries as you go. This information is quite fun to learn.

The GRAPHICS are VERY WELL DONE in CARTOON style. Everything is easy to see, even the very small items. And there is plenty of colour and light. Plenty of AMBIENT sound and suitably Mediterranean MUSIC as well. NO VOICEOVERS.

This is solid, well constructed game which makes a pleasant and unique alternative to the traditional HO GAMES such as Amazing Adventures.

A pleasure to play.